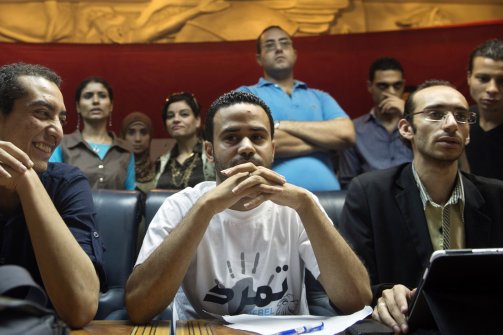 Tamarod, the grassroots campaign which orchestrated the ouster of former president Mohamed Morsi, is likely to form a political party, according to group coordinator Mohamed Heikal.

The campaign was launched in late April to collect petitions from citizens withdrawing their confidence in Morsi as president.

Campaign founder Mahmoud Badr told independent satellite channel Al-Hayah on Sunday that Tamarod will continue its political activities in the form of a party, but added that the campaign is yet to decide whether it will take part in the coming parliamentary elections.

“Playing politics is all about being flexible,” Heikal said.

The decision contradicts earlier statements made by Badr in late July denying the campaign’s intention to form a political party.

Heikal said the campaign went through different phases based on the stages it had to skip. Tamarod started as a campaign when the main goal was to overthrow Morsi and the Muslim Brotherhood government and offer a specific roadmap to be followed after Morsi’s departure, Heikal said. When that goal was achieved, the campaign turned into a movement, with strong presence on the ground, focused on drafting the constitution, which is the first step in carrying out the roadmap. Since the next step would be to hold parliamentary elections, Heikal said, the campaign must become a political party to be able to take part in such elections.

“Maybe tomorrow Tamarod will become a government when we win the elections,” Heikal said. “We have enough popularity to become a party.”

Heikal said that the principles upon which Tamarod’s party would be built would stem from the goals of the 25 January Revolution. That is; bread, freedom, social justice and national independence.

He said there is no particular political ideology the party is likely to adopt. “After the 25 January Revolution, our nation should be bigger [and more important] than any ideology,” Heikal said.

Tamarod’s primary goal was to collect 15 million signatures from citizens calling for early presidential elections by 30 June, which marked as the first anniversary of Morsi’s inauguration. By 29 June, the party announced it had collected over 22 million signatures. The campaign is seen as the trigger for Morsi’s ouster by Abdel Fatah Al-Sisi, general commander of the armed forces, on 3 July.