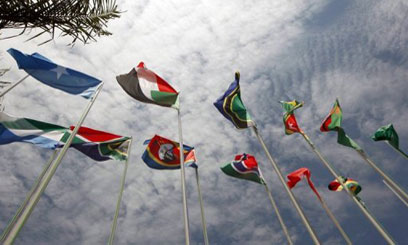 State-run Al Ahram said Ahmed Al-Tayeb supported the AU’s goals to reject violence, unite views of different factions and welcomed their description the events in Egypt as “not  a military coup” when he met the delegation on Wednesday.

Abdelatty said the state information service will be presenting videos of criminal acts, usage of fire arms against civilians and occupation of mosques to AU in efforts to explain the real situation in Egypt.

Abdelatty said the government is willing to welcome foreign delegations as long as they respect Egypt’s sovereignty and avoid interfering in internal affairs.

The government also hoped by the end of the AU’s visit that the panel will correct its decision regarding Egypt’s suspension from all union activities, he said.

The AU delegation, which arrived on Tuesday, is expected to remain in the country until 3 September. The delegation has already submitted a report of the findings from its first visit to the AU Peace and Security Council.

The AU high level panel led by former president Alpha Oumar Konare of Mali’s visit is part of AU’s effort to assist Egypt in overcoming its challenges in the spirit of African solidarity and in search for solutions to African problems, according to an AU statement released on Tuesday.