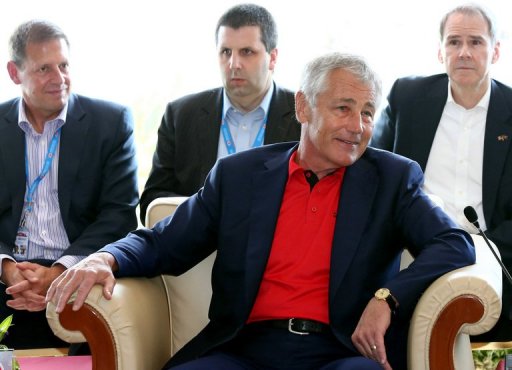 US Secretary of Defence Chuck Hagel expressed reluctance to sever ties with Egypt amid a White House review of its relationship with one of its strongest allies in the region.

In an interview with the BBC on Tuesday Hagel said: “we would not want to see the disintegration of a relationship with a large important country like Egypt.” He described the situation in Egypt as “very complicated” and pointed to the historic diplomatic ties between the US and Egypt, with their roots in the 1979 peace deal between Egypt and Israel that US brokered.

Hagel’s comments come at a time when the US State Department and the White House are reviewing the country’s “entire relationship with the Egyptian Government, including assistance, and determining the best way to move that relationship forward,” according to the deputy spokeswoman of the State Department Marie Harf.

Hagel said that he in “over 20 conversations” with interim Minister of Defence General Abdel Fatah Al-Sisi and conversations between other US officials and their counterparts that the message has been the same. “The interim civilian government has to get back on to a pathway of reconciliation, stop the violence and put Egypt back on a path of democratic and economic reform.”

The US Secretary of State spoke with Minister of Foreign Affairs Nabil Fahmy regarding regional issues, such as the Syrian conflict and the Middle East peace process, said official spokesperson for the ministry Badr Abdelatty.

Harf also said of the conversation: “in a lot of these discussions, Egypt is discussed as well.”

The State Department has continually expressed concern with regard to developments on the ground, “which is playing into our ongoing review,” said Harf, adding that it “will feed into an eventual decision on what our relationship will look like going forward.”

No timeframe has been set as to when a decision will be announced by the US on its relationship with Egypt.

In his interview Hagel stressed: “We want allies, we want relationships [and] we want partnerships.” He added that Egypt has played a “responsible part” in preventing “the Middle East from breaking out into an entire regional war.”

One of the most talked about aspects of the US-Egypt relationship is the aid provided by the US. The US provides $1.23bn Foreign Military Financing (FMF) annually and $250m Economic Support Fund, which provides aid for a variety of non-military governmental and nongovernmental organisations. $650mn of the FMF for the current financial year has already been delivered to Egypt, leaving $585mn up for review.

The US administration decided not to make a determination on whether or not Mohamed Morsi’s ouster was a military coup. If it were to determine it as a coup, the US would be bound by law to cut funding to Egypt.

A recent poll conducted in the US showed that the majority of Americans are in favour of cutting aid to Egypt. The results from the Pew Research Centre said from 1000 telephone interviews, 51% would want to cut aid to increase pressure on the interim government in Egypt, 26% were in favour of continuing aid to influence the situation on the ground and 23% responded “don’t know”.

In Egypt two separate signature campaigns have recently emerged in order to gain support for rejecting US financing.

The 6 April Youth Movement (Democratic front) launched the We Can campaign and claimed to have collected over 3,000 signatures before street campaigning. The second campaign called Ban the Aid  is backed by the Tamarod movement, that has experience in signature campaigning. The group collected millions of signatures calling for the withdrawal of confidence in Morsi and early presidential elections.

Tamarod is regarded to have been the driving force behind the 30 June mass demonstrations that led to the military removing Morsi from power.

We Can calls for a review of the Camp David Accords in order to limit the US influence on Egypt’s internal affairs. Ban the Aid is demanding that the accords be cancelled all together which would involve dissolving the peace agreement with Israel that is the main focus of the accords that were signed in 1978 by President Anwar Sadat.

Hagel said that while the US is “trying to influence and help and assist where [it] can”, he also highlighted: “You can’t go in and impose, you can’t dictate. It’s up to the Egyptian people what kind of a future they want and what kind of a government they want.”