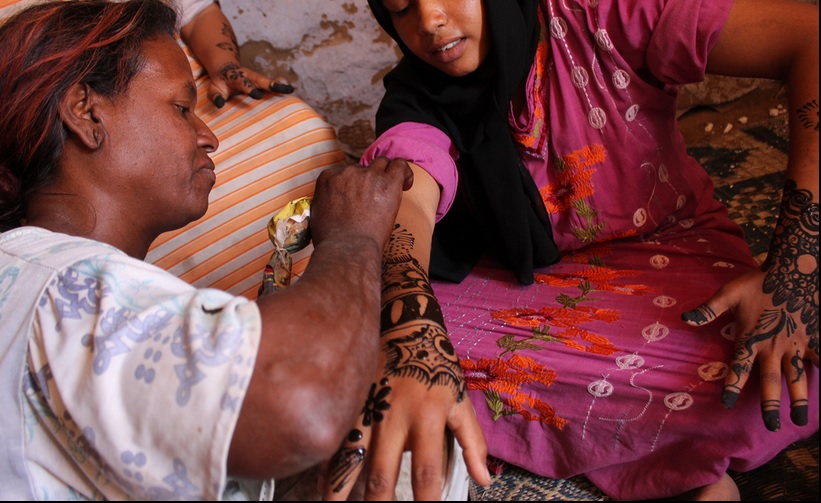 We took a truck to the absolute end of the village of West Aswan after leaving the house at around dusk. Our task would be to return to the house by foot, only after knocking tirelessly on the doors of the neighbours and friends of the groom’s family, inviting them to attend the approaching wedding day.

Last May a friend asked me to photograph his nephew’s wedding while documenting Nubian wedding traditions in West Aswan. So on this night, I went with the groom’s sister and her friends to dozens of homes to remind the village of the wedding date and ensure that an ample number of guests would make their appearance.

As we passed through the high and colourful arched entrances that characterise traditional Nubian architecture and into the wide-open courtyards furnished with smooth sand, we quickly greeted, chatted and laughed with each family and encouraged them to attend the upcoming nuptials. We then would exit through the backdoor, entering directly into another neighbour’s house only to repeat this swift and cyclical greeting process again and again.

In West Aswan an entrance to one house often is an exit for another; the unique design of many traditional Nubian homes reflects the communal nature of the village. For visitors and newcomers alike, it can easily feel as if they are in a labyrinth.

We were not the first to make the trek around the village or go through these mazes of households. The bride had preceded us weeks earlier, as it is custom for both the bride and the groom to personally invite the guests.

“The groom usually takes his car and goes with his friends around the village to invite the people,” said Karima Seyam, a specialist in Nubian traditions who lives in Cairo. She explained that in the past people may have even taken small presents and perfumes to the invitees’ houses to help persuade as many as possible to attend.

Though traditional Nubian weddings may last well over a week, now the most significant celebrations happen primarily during two days: the henna (pre-wedding party) day and the marriage day. “Every Nubian village has their own tradition. One village may have three nights another one has two nights,” said Fatma Serag, whose family comes from Alalaki, Aswan. “But in the past the wedding festival could take up to seven days.”

Serag explained that many of these changes can most likely be attributed to the fact that the groom’s or the bride’s family does not earn enough money for a seven day festival anymore, something which not only affects the length of the wedding celebrations but also the amount of gifts that are exchanged. This change in tradition is a reflection of the general situation in Aswan, which, like many places outside of the capital, faces underdevelopment and is doubly burdened by the deteriorating economic state of the country.

Despite this, however, a wedding celebration remains an important aspect of life and culture that many people are invested in continuing.

Before the official henna the groom’s sisters and friends go to a henna designer to have their hands decorated; we spend over eight hours crammed together in a small room, watching the lines of liquid henna stream out the small tube and admiring the artist as she drew intricate designs on our hands and feet. After the henna dried, we washed it off to reveal beautiful and delicate designs. We then placed our hands and feet over a hole in the corner of a dark and smoky room the women call the dukhan. The dukhan, the literal translation from the Arabic means ‘smoke’, is a smoking fire that has been built in a hole in the ground. It is used in both Nubia and parts of Sudan to aromatise the body and to blacken the henna patterns on the skin. Seyam emphasised that it is rituals like this that highlight the importance of henna and the henna day in Nubian weddings.

The next day, the celebrations began early and I was whisked away to several locations as the festivity spread from house to house. Male friends and relatives of the bride and groom go to the bride’s house first and to play the tabla, a traditional handheld drum, and sing. Similarly, female relatives and friends sing and dance at the groom’s house. The processions finally culminated at the groom’s house where they join in a meeting of rhythm and joy as the groom entered with his friends.

“Arees bastabu ya wa hed!” a symphony of voices sang to him in a perfect combination of cadence and verve. Serag laughed when I asked what these words, which combine Arabic and Nubian, mean. She explained it is a traditional greeting used by all Nubians, regardless of tribe or language, to express joy. “We say this when the groom enters the party. It is song to begin the festival,” she said.

The arrival of dusk also saw food brought out on platters by men in long white galabeyas. Henna day almost always ends with dancing and this wedding was no different.  A local wedding DJ and musical troupe were hired to provide music for the children’s dance outside the groom’s front yard. Later, a cow was ceremoniously slaughtered and prepared for tomorrow’s feast.

Despite the previous night’s dancing, the morning of the wedding day started extremely early. It was well before sunrise and half the courtyard was already transformed into a makeshift kitchen where last night’s slaughter was being cooked. On this day the preparation of the food was a joint endeavour; the men cooked the meat and filled pastries, while the women cut vegetables and prepared the serving platters. The younger ones took the arduous chore of entertaining those hard at work with music, lots of drums and naughty jokes.

As darkness approached the families separated and headed to the hairdresser’s to perfect their transformations. The groom’s sister and friends adorned themselves in gleaming and shimmering dresses as they powdered themselves, while the groom and his friends prepped elsewhere. After stopping at the portrait studio for a quick photo session with the bride and groom, and a minor dance party in the street in between, we returned to the village where the guests had already been fed and an eight-hour concert was just beginning.

While most other weddings end their concerts at midnight, at Nubian weddings in Aswan, midnight is exactly when the wedding really began. Although women and men often dance in separate spaces, with the men in front and closer to the stage, it is not uncommon to see female and male relatives dance together. And everyone participated, the young, the old, men and women. No one in attendance seemed to know the definition of getting tired; the dancing lasted until 8am, well after the sun had risen.

As the numbers dwindled the music finally ended. A breakfast of tea with milk served with biscuits for those who were still awake enough to eat; but many were already deep asleep at their neighbours’ or relatives’ houses.

Throughout the entire visit, everyone I spoke to insisted on the importance of preserving traditions, culture and language. As members of one of the oldest civilisations in Africa and the Nile Valley, Nubians take great pride in their heritage; there is a vitality and endurance that has sustained the people of Nubia for millennia, which allows them to recreate the traditions of the past while simultaneously reinventing and adjusting them to ensure they will always be part of their future.