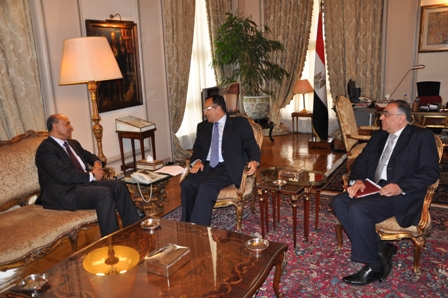 Minister of Foreign Affairs Nabil Fahmy met with his Libyan and Saudi Arabian counterparts ahead of a meeting of Arab foreign ministers at the Arab League to discuss Syria.

Fahmy agreed with his Libyan counterpart to foster stronger ties between their two countries in a variety of areas.

Mohamed Abdulaziz was hosted by Fahmy at the Ministry of Foreign Affairs on Sunday morning, ahead of a ministerial meeting of the Arab League, which both are expected to attend.

Fahmy told his Libyan counterpart that Egypt “attaches great importance to its relations with Libya,” according to a ministry statement.

The two foreign ministers agreed “to move forward in expanding economic, trade, cultural and security relations” between the neighbouring countries. This includes “opening the Libyan markets to Egyptian companies and products and benefiting from the Egyptian expertise in the fields of training and institution building in various sectors.”

Abdulaziz stressed the importance of Egyptian workers and companies “in the reconstruction of Libya.” He also expressed “support for Egypt in regional and international forums in this delicate phase.”

The spokesperson said Fahmy and Al-Faisal agreed to “deepen relations” between the two countries. The Saudi minister expressed his country’s full support for Egypt and Fahmy thanked him for this.

In a press conference following their meeting Fahmy reiterated that Egypt will have no part in any military action against the Syrian regime and stressed the importance of finding a political solution to the crisis.

Abdelatty said that any strike should be exercised under international law and stressed that Fahmy “denounced and deplored the use of chemical weapons.” The spokesperson added that it is important to wait for the results of the United Nations chemical weapons inspectors before making a decision, also stressing the importance of determining who used the weapons.