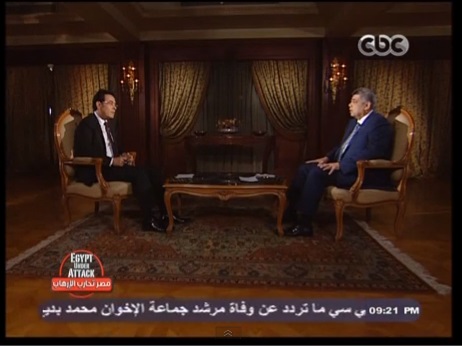 Minister of Interior Mohamed Ibrahim had known that former president Mohamed Morsi’s government would collapse since April, the minister said in a Saturday interview on CBC show Momken.

Ibrahim added that since then he had decided to work “for the best of his department and the Egyptian people.”

The minister said Sinai will be declared a “terrorist-free zone” during 2013, and that the militants in Sinai belong to one group, which finds support from many fronts in Gaza, including Hamas and Ezz El Deen El Kassam brigades.

Ibrahim said that the state of emergency would last for three months by law, but may not be necessary for that full time. The minister added that General Abdel Fatah Al-Sisi acts solely as defense minister and deputy prime minister, and does not “rule” Egypt.

When asked about the dispersal of pro-Morsi sit-ins in Rabaa Al Adaweya and Al Nahda, Ibrahim said the National Defense Council wanted to disperse it earlier but the presence of the European Union’s High Representative of for Foreign Affairs and Security Policy, Catherine Ashton and her efforts to disperse the sit-in peacefully, and then Eid Al Fitr delayed the decision.

Ibrahim added that he informed several NGOs and human rights groups before the dispersal happened, and that the amount of fire opened at the policemen in Rabaa was “very dense”, and came from Rabaa’s mosque, hospital and four buildings around the sit-in. Ibrahim said that Mohamed ElBaradei was present when the decision to disperse the sit-ins was taken but he (El Baradei) was opposed to the amount of casualties.

The minister, originally appointed by Morsi, said that the bodies in El Iman mosque were transferred from Rabaa, some of which he said were “dead before the dispersal” and some were found with no bullets in their bodies.

Ibrahim asserted that “Egypt now has a department of political security that works under the rule of law” for which he had recruited some former State Security personnel. The State Security department in the Ministry of Interior was dissolved after 25 January Revolution. He added that no political activists will be pursued unless they break the law. Ibrahim expressed hope to “transform the Ministry of Interior into a foundational entity that does not change according the political regime by any means.”

The minister also rejected the allegations of assault and torture by the lawyer for the Brotherhood’s Supreme Guide, Mohamed Badie. He added that prominent Brotherhood leaders Mohamed El Beltagy and Osama Yassin who were arrested last week, are more important than Badie for the group, because they are “on-the-ground” leaders.

Ibrahim promised that who attacked the Kerdasa police station will be brought to justice, saying that there is a plan with cooperation with the Armed forces, but it will be executed with the “the right timing”.

The minister added that the Abu Zaabal case is under investigation by prosecution, pointing to an internal investigation within the ministry.

Ibrahim, who retained his position after 30 June 2013, said that Brotherhood leader Essam El Erian and Jamaa Al-Islamiya leader Assem Abdel Maged will be arrested “when the time comes” while he added that prominent Brotherhood leader, who is said to be its temporary supreme guide, Mahmoud Ezzat is in Gaza.

Ibrahim said that he is concerned over the Brotherhood’s transforming their operations into “underground operations and assassinations”, saying that he himself is targeted and has received multiple death threats.