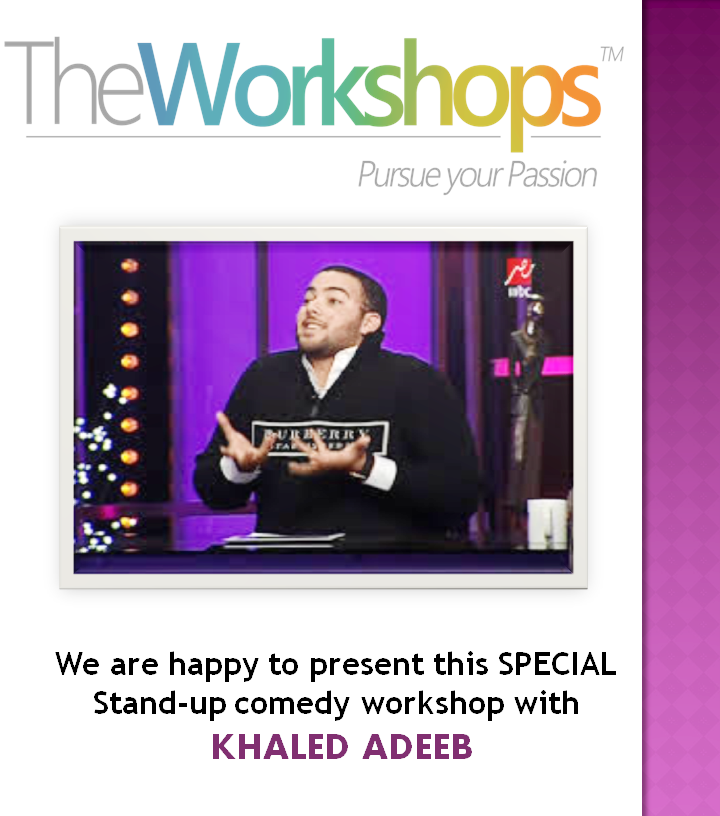 The Workshops are introducing a new type of training to their menu; stand-up comedy. The entertainment form has taken Egypt by storm during the past few years, from foreigners coming to do their bit to local talents aiming for stardom. We interviewed the self-professed comedian and instructor of the workshop, Khaled Adeeb.

“I’ve studied theatre at AUC, directed six plays, starred in four productions. I’ve also worked on several short films, I am primarily a writer and creative editor for TV shows. I got into standup comedy a year ago through Al-Hezb El-Comedy, which is an independent standup comedy platform that discovers new talent,” Adeeb said.

Adeeb explained that anyone can apply for the workshop since no experience is needed. “I’m simply using comedy as a pathway to much greater things, such as stage presence and live audience interaction. I consider this workshop a lot more about performing arts in general than it is about standup comedy in particular,” he explained.

He listed the aspects of performing which he will focus on during the training: stage presence, how to deal with a live audience, writing material, improvisation, storytelling, being unique and creating a style, and general dos and don’ts.

He added that if the participants are willing to perform live after the workshop is over, he will do his best to make it happen. “I will use my contacts in the business to give them real life experience, I believe in baptism by fire, and hopefully at the end of this workshop all those attending will have a good enough grasp of the elements I will teach to go on and successfully perform,” he said.

He has also planned some surprises: “I can assure you that many interesting guests will be popping into our work space unannounced, and the attendees will definitely face a challenge or two they do not expect.”

Adeeb does have a disclaimer though: “Finally I’d like to say that you cannot teach how to be funny, and that’s not what I’m trying to do.”

He added: “Whether you’re a student, an executive [who] has to give presentations, or someone who just wants to burst out of their bubble, this is the workshop for you. We are simply using comedy as a medium to transform us all, including myself, into more confident, self assured, eloquent and well-rounded people. The ability to speak in public, think on your feet and harness your own unique charisma are the primary goals.”

The stand-up comedy workshop will start on 7 September and costs EGP 480.