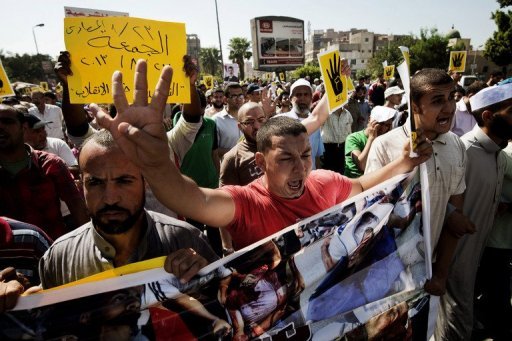 The National Council to Support Legitimacy called for protests on Tuesday, 3 September, under the title, “the coup is terrorism.”

Tuesday will mark two months since the removal of former President Mohamed Morsi on 3 July.

On Tuesday, the pro-Morsi coalition is planning a “million-person march” in all squares as well as “press conferences exposing the crimes of the coup and revealing their faults,” according to a statement the coalition released on Saturday.

“The continued daily congregation of the people, and their going out to all Egyptian squares… will certainly defeat the coup plotters and break the coup soon,” the statement read.

The coalition added that there are Egyptians living in Europe who are documenting the crimes of “coup leaders” to present to the International Criminal Court.

The coalition, which includes 11 parties and unions, is backed by the Muslim Brotherhood, which said in a statement on Saturday that the people will not rest until they bring down the military regime.