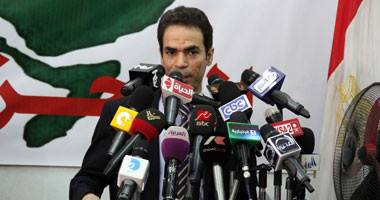 Interim President’s media adviser, Ahmed El-Moslimany is meeting with the Egyptian Social Democratic Party leaders on Wednesday as part of his deliberations with the various political factions, reported state-owned MENA.

El-Moslimany met representatives from the Tamarod (Rebellion) campaign on Monday. In a press conference following the meeting he said that “The youth movement in Egypt is compared to the American and European youth movements in 1968”

El-Moslimany also discussed the “New Leaders” initiative, which aims at creating political leaders outside of Cairo, in a step towards decentralization.

Mahmoud Badr, general coordinator for Tamarrod, said in the same press conference that the campaign is committed to a civil democratic constitution, and parliamentary elections following the single-member plurality system. He added that “the revolution’s enemies might enter parliament through an electoral lists system”

Badr discussed economic problems, saying that “the revolution must present solutions, not only political, but also economic” He added that debts on White Taxi drivers and farmers should be dropped or paid by the government.