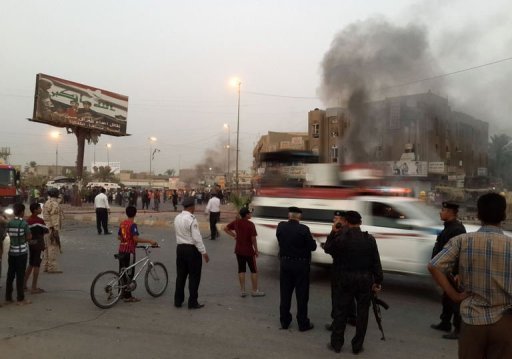 AFP- Attacks around Baghdad and North Iraq left 33 people dead on Wednesday, including 18 members of a Shia family killed by militants, the latest in a nationwide surge of violence.

The unrest came a day after a wave of bombings targeting Shias in Baghdad and shootings and bombings elsewhere killed 61 people, further raising fears Iraq is slipping back into the all-out sectarian bloodshed that left tens of thousands dead in 2006 and 2007.

Authorities, meanwhile, announced the arrest of an alleged senior aide to Izzat Al-Duri, the highest-ranking member of executed dictator Saddam Hussein’s regime still on the run.

Wednesday’s violence struck towns on the outskirts of Baghdad as well as predominantly Sunni cities in the north of the country, with the deadliest attack occurring south of the capital.

Shortly after midnight, militants bombed adjacent houses belonging to Shia Muslim brothers in the town of Latifiyah, which lies about 40 kilometres (25 miles) south of Baghdad.

A total of 18 people were killed, including five women and six children, and a dozen others were wounded, according to an army officer and a doctor at a nearby hospital.

Latifiyah lies within a confessionally-mixed region known as the “Triangle of Death”, so named for the brutal violence that plagued the area during the peak of Iraq’s sectarian war in 2006-2007.

Last week, another attack on a Shia family in the town killed at least five people.

No group claimed responsibility for the latest violence, but Sunni militants linked to Al-Qaeda frequently carry out attacks against Iraq’s Shia Muslim majority who they regard as apostates.

Bombings in two Sunni-majority cities north of the capital killed six people, including five policemen who died in a suicide car bombing against a police station in Mosul, one of Iraq’s most restive cities.

The latest bloodshed came as Baghdad was still reeling from a wave of car bombs targeting Shia neighbourhoods the previous evening that killed 50 people, while unrest elsewhere left 11 others dead.

Among the attacks was a car bombing in the central commercial district of Karrada where four storefronts were badly damaged.

Workers were still picking up the pieces from the previous evening’s violence on Wednesday.

At one restaurant, where windows were completely shattered by the blast, three men were consoling each other as they tried to clean up the aftermath of the attack.

“Please, we have cried enough,” one of them told another, before himself breaking into tears, while one of the men held up the clothes of a friend who died in the attack and shouted, “These are his clothes — what should I do with them?”

The bombings were the latest in a series of attacks timed to coincide with people visiting cafes and other public areas during the evening.

In the past, coordinated violence has typically been confined to the morning rush-hour, when the capital is normally in gridlock.

Attacks have killed more than 3,900 people since the start of the year, according to an AFP tally.

Iraqi officials have trumpeted wide-ranging operations targeting militants in which hundreds of alleged fighters have been captured and dozens killed.

On Wednesday, a spokesman for the Counter Terrorism Service announced the arrest of Hussein Al-Khazraji, who security forces say is a top aide to Izzat Al-Duri, Saddam’s vice president.

Saddam’s Baath party has said Al-Duri, the king of clubs in the US deck of cards showing the most-wanted members of the now-executed dictator’s regime, died in 2005.

But audio messages have been attributed to him in recent years and he is accused of orchestrating violent attacks.

Despite the string of operations and arrests, a long-running political deadlock combined with frustrations in Iraq’s Sunni Arab minority and concerns neighbouring Syria’s civil war is spilling over into Iraq have fuelled warnings that violence is unlikely to abate.