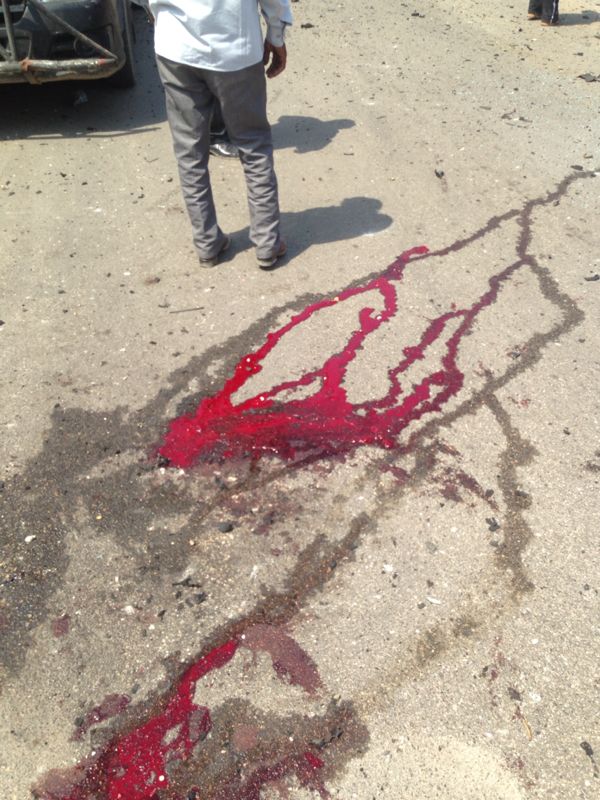 The Ministry of Interior believes that the assassination attempt on the Minister of Interior was “likely to be a suicide bomb.” The ministry believes “terrorist elements” to have been involved.

Minister Mohamed Ibrahim was en-route from his home in Nasr City to the ministry in downtown Cairo on Thursday morning when a large explosion occurred as his motorcade passed by a parked car.

The Ministry confirmed in a statement on Thursday afternoon that the blast injured a total of 21 people, some of whom are in a critical condition. Ten policemen were injured, four of which are officers, and 11 civilians. Among the civilians injured is a seven-year-old boy who lost his foot as a result of the explosion.

Following preliminary investigations the ministry announced that the attempt on the minister’s life could have been a suicide bomb. The investigators believe that the “strong explosives” were in a bag inside a car parked on Mostafa El-Nahas Street.

The ministry is examining the “devices” it believes to have caused the explosion and identifying body parts that were found at the scene.

Minister of Defence General Abdel Fatah Al-Sisi sent a letter to Ibrahim condemning the attempt on the minister of interior’s life. Al-Sisi described it as “a sinful attempt” and said, “such attempts are rejected by all heavenly religions.” He expressed his support for the police “in the face of crime, the arrest of outlaws and the extension of security and stability.” He stressed that he is confident in the ability of Egypt’s security forces to “deal firmly and decisively with terrorist elements.”

Amr Darrag, a member of the Anti-Coup Alliance told Al-Jazeera on Thursday “that the bombing allegedly targeting the Minister of Interior is regrettable.” He said, “the bombing should be condemned irrespective of the perpetrators,” adding, “we reaffirm our peaceful approach which is clear in all our protests.”

The Islamist group Al-Jamaa Al-Islamiya denied on Thursday any involvement in the attack, reported state news agency MENA. In the past the group has been responsible for a number of terrorist attacks targeting security forces and tourists but has since renounced the use of violence.

Al-Dostour party strongly condemned the attack on the minister and confirmed that it viewed this as a “treacherous terrorist operation” adding that it “represents a serious escalation in the violence and armed terrorism which has dominated Egypt over the past few weeks.” Al-Dostour stressed the implementation of Egypt’s road map set out by the armed forces after the ouster of Mohamed Morsi.

Head of the Salafi Al-Nour Party Younes Makhioun also condemned the attack saying his party “condemns the use of violence in all methods and forms.” Makhioun also stressed that no blame should be placed on anybody until a full investigation has been carried out.

The 6 April Youth Movement also condemned the assassination and called for the perpetrators to be quickly brought to justice. The movement “affirms that Egypt will not go back again to the ages of bombings and assassinations,” and called for the acceleration of transitional justice “to resist the spread of terrorism again in Egyptian society.”

Secretary General of the Arab League Nabil El-Araby decried the attack and “warned against such criminal acts aimed at destabilising security in Egypt.” He added that these sorts of attacks are only “seeking to disrupt the implementation of the road map.”

The United States embassy “condemns in the strongest terms,” what it describes as a “heinous terrorist attack.” It also extended its condolences to the families of those injured.