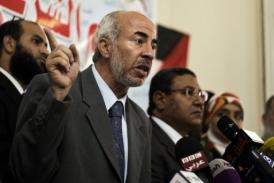 AFP-  Egypt is expected to announce soon whether or not to dissolve an NGO linked to the Muslim Brotherhood amid allegations it operates as a front for the Islamist group.

On August 14, the authorities launched a fierce crackdown on the Brotherhood following the 3 July ‘s ouster of Islamist president Mohamed Morsi, who hails from the group.

Top Brotherhood leaders, including its supreme guide, have been arrested, effectively decapitating the movement and disrupting its organisation.

“The decision will be announced in a few days,” said Hani Mhana, spokesman for the ministry of social solidarity which has received complaints about the NGO’s operations.

However, a media adviser to the cabinet said no decision has yet been taken on the issue.

“The government has not taken any decision,” Sherif Shawky said.

Mhana said the NGO has been accused of involvement in several illegal activities.

“The Egyptian authorities are accusing the Muslim Brotherhood NGO of engaging in violent actions, using the headquarters (of the Brotherhood) for political activities and storing weapons in it and firing on protesters,” Mhana said.

He said the authorities had given the NGO three chances to explain its position.

“But there was no response,” he said.

Social Solidarity Minister Ahmed Hassan el-Boraie declined to comment to AFP, saying only: “Everything will be clarified at a press conference this week.”

The ministry’s legal adviser Mohammed el-Demerdash said that “all discussions about the dissolution concern the NGO and not the group. The group has no legal status to be dissolved.”

The NGO was founded and registered in March under Morsi’s presidency.

Long banned in Egypt, the Brotherhood itself had become gradually tolerated in the years before the 2011 revolution, winning parliamentary seats through candidates standing as independents.

The Brotherhood took centre-stage after the uprising that toppled Hosni Mubarak, but since Morsi’s ouster it has become the target of the country’s military.

More than 2,000 Brotherhood members have been arrested since August 14, the day hundreds of people were killed when security forces stormed two protest camps in Cairo.

It was the bloodiest day in Egypt’s recent history.

Morsi himself was detained on July 3 and is being held at an unknown location.

Since last month’s crackdown the group has failed to mobilise supporters despite repeated calls for demonstrations against the new authorities.

It has called for mass protests after weekly Friday prayers in Cairo, Alexandria, the restive region of north Sinai and elsewhere.