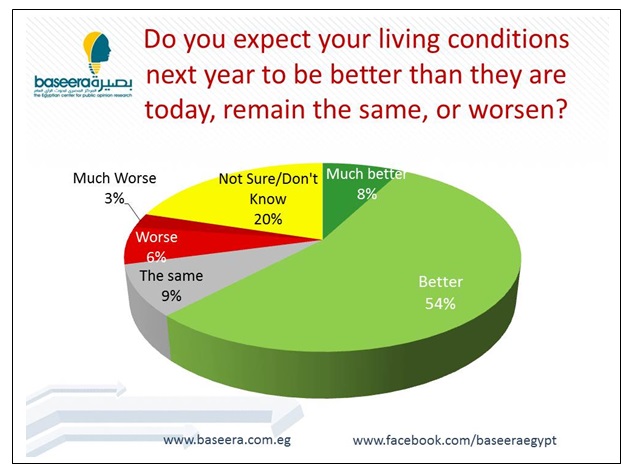 The Egyptian Center for Public Opinion Research “Baseera” has conducted a new poll on Egyptians’ opinions regarding their feeling of safety, living conditions, and expectations of their living conditions during the next year. The poll was conducted in the context of the successive events Egypt has undergone, and the direct and indirect consequences they might bring to bear on the above mentioned topics.

Results indicate that 73% of Egyptians currently feel unsafe, with no clear variation between urban and rural areas (71% and 74% respectively). In Lower Egypt that figure measures 71%, rising to 74% in urban governorates and 75% in Upper Egypt. Results illustrate that youth feel more unsafe than their older peers, with 78% of youth aged 18-29 replying that they feel unsafe, compared to 64% among those aged 50 or above.

This opinion poll was conducted a few days after a 7 pm curfew was put in place. It is for this reason that the centre asked respondents whether their incomes had been affected by the curfew, with 46% replying that it had. This percentage increases from 44% in rural areas to 50% in urban areas.

Results also indicate that it is the urban governorates that are most affected by the curfew, with the percentage of those who replied that their incomes had been affected measuring 53%, compared to 47% in Upper Egypt and 43% in Lower Egypt.

The percentage of those who feel their living conditions have worsened rises from 59% in urban areas, to 64% in rural areas.

The poll was conducted using landline and mobile telephones on a sample size of 1395 ages 18 or older nationwide. All interviews were conducted during the period from 19 to 21 August, 2013. The response rate was approximately 73%, while the results’ margin of error is less than 3%.