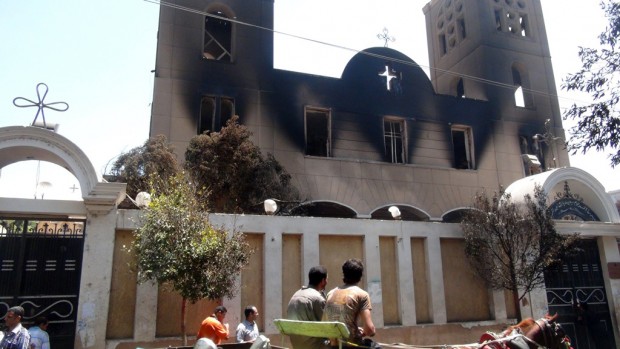 A group of independent human rights organisations condemned the collective verdicts issued by a Suez military court regarding 63 civilians.

In a joint statement released on Monday, the Egyptian Initiative for Personal Rights (EIPR), the Egyptian Centre for Economic and Social Rights (ECESR), the Hisham Mubarak Law Centre (HMLC) and the No Military Trials group called for retrying the 63 civilians in front of a civilian court instead.

The signatory organisations called upon interim president Adly Mansour to use his legislative authority to immediately amend the Military Judiciary Law in a manner which prohibits the trial of any civilian in front of military courts.

On Tuesday, a Suez military court dealt a life sentence to a Muslim Brotherhood member for violence against the army.  The verdict was handed down over the 14 August attacks, committed by supporters of deposed president Mohamed Morsi, which targeted the armed forces, churches and civilians in the canal city of Suez.

Fifty other defendants were given sentences between five to fifteen years in prison, while twelve were acquitted of the same charges, the statement read. All detainees were accused of attacking military personnel with rocks and Molotov cocktails.

The organisations stated that the verdicts were issued only after two trial sessions held on 24 and 26 August. They accused the Third Army’s security forces of exercising arbitrary measures against the lawyers defending the detainees.

The state-run National Council for Human Rights (NCHR) also condemned the Suez court verdict. In a statement released on Thursday, the NCHR said that the verdicts violate defendants’ right to a just civilian trial.

The council called on the general military ruler to cancel last Tuesday’s verdict and retry the detainees in civilian courts. It also urged the 50 member constituent assembly, currently drafting amendments to the 2012 constitution, to clearly ban the trial of civilians in military courts in all cases.

The four independent organisations stated that last Tuesday’s verdicts were the third wave of military verdicts served to civilians since the interim government came into power on 3 July. On 24 July, eight civilians accused of insulting military personnel, among other charges, were sentenced to two years in prison by a military court. The verdict was then reduced to one year in prison. Another military verdict was served on the same day to two more civilians accused of assaulting military personnel.

The armed forces spokesman’s office cited article five of the Martial Law which prohibits the military trial of civilians unless they have committed a crime against military personnel, equipment or institutions.

Article 19 of the constitutional declaration, proposed by Mansour, states that the military judiciary specialises in all lawsuits that concern the armed forces.

The 2012 Constitution, strongly supported by the Muslim Brotherhood, also allowed for civilians to stand trial before military tribunals.