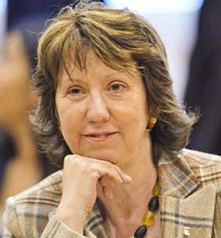 The EU still stands by the people of Egypt, affirmed High Representative of the European Union for Foreign Affairs Catherine Ashton during a Wednesday session of European parliament.

Ashton noted in her address that she had visited Egypt 11 times, three of which this summer, and during her most recent visit, she had visited ousted president Mohamed Morsi in an undisclosed location – the only foreign representative to do so.

The high representative said that “four principles” had been outlined to “those in power” in Egypt, saying that while the EU does not take sides in the choices of Egypt’s people, they do “believe in a constitution that will support democracy, rule of law, justice, and respect for human rights and fundamental freedoms.”

The EU foreign policy head meanwhile described the growing level of violence and the polarisation of Egyptian people as alarming. During her visit, Ashton said, she could “feel the antipathy to the Brotherhood and could see the growing numbers of people on the streets, the growing worries of religious groups – the Christian community who later saw many churches destroyed.”

The statement comes during the plenary session of the EU parliament in Strasbourg where the situation in Egypt and Syria were the main points of the agenda.

On 30 June, millions took to the streets to call for the ouster of former president Mohamed Morsi, while Morsi’s supporters organised sit-ins in Rabaa Al-Adaweya and Nahda Square, which were forcibly dispersed on 14 August.

Addressing the motivations behind the 30 June protests, Ashton said: “It was obvious that the failure to deliver political and economic change to the people of Egypt had led to the prospect of huge demonstrations and civil unrest.”

Ashton specified during the statement that she met with Morsi’s during his presidency in the presidential palace, where she told him that “[she] believes that he and his country were running out of time.”

Meanwhile, Ashton had also visited several civil societies during her 7 April visit, which she said were feeling “alienation from the government.”

“It seemed to me that there was a President who believed that it was enough to be elected, but not someone who understood that democracy demanded much more than that,” Ashton said, speaking of her visit with Morsi during his presidency.

Ashton advocated the continued funding for socioeconomic programmes in Egypt, saying “we must continue to support the people.”

Ashton ended the statement by stating that Egypt is “without question…a great country, and a strong partner for the European Union” but it succeeding should be in accordance “with the principles and values that we hold.”