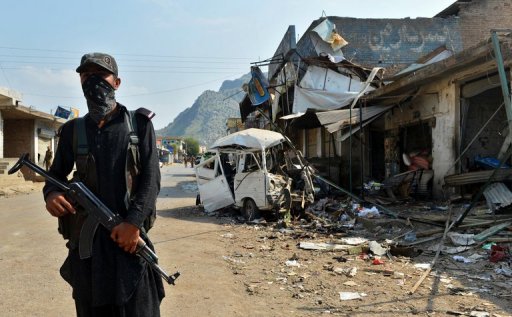 AFP- A bomb explosion Saturday killed two members of a Pakistani pro-government militia and wounded four others during an archaeological dig in a tribal district on the Afghanistan border, officials said.

The incident took place in the mountainous area of Darra, 30 kilometres (18 miles) northeast of Khar, the main town of Bajaur tribal district, one of the seven semi-autonomous tribal regions.

“About a dozen members of the local peace committee were digging at an excavation site when a remote controlled bomb went off, killing two members and wounding four others,” senior local administration official Sardar Yousuf said.

The group were digging in the area to look for antiquities.

Pakistan has for years been fighting homegrown Taliban insurgents in its northwestern border areas with Afghanistan.

Washington considers the tribal areas a major hub of Taliban and Al-Qaeda militants plotting attacks on the West and in Afghanistan.

Meanwhile, local militants in South Waziristan tribal region on Saturday released at least eight kidnapped officials including engineers and technicians of the Water and Power Development Authority (WAPDA) without any pre-conditions, officials said.

“They were handed over to local administration on the border of South and North Waziristan,” spokesman of the governor’s house in Peshawar, Muhammad Haroon told AFP.

He said that the officials were working on the Gomal Zam dam project when they were kidnapped two years ago, adding that the tribal elders in South Waziristan played an important role in securing safe release of the officials.

A senior WAPDA official, Tahir Khan also confirmed the release and said that the officials have now safely reached the northwestern town of Bannu.