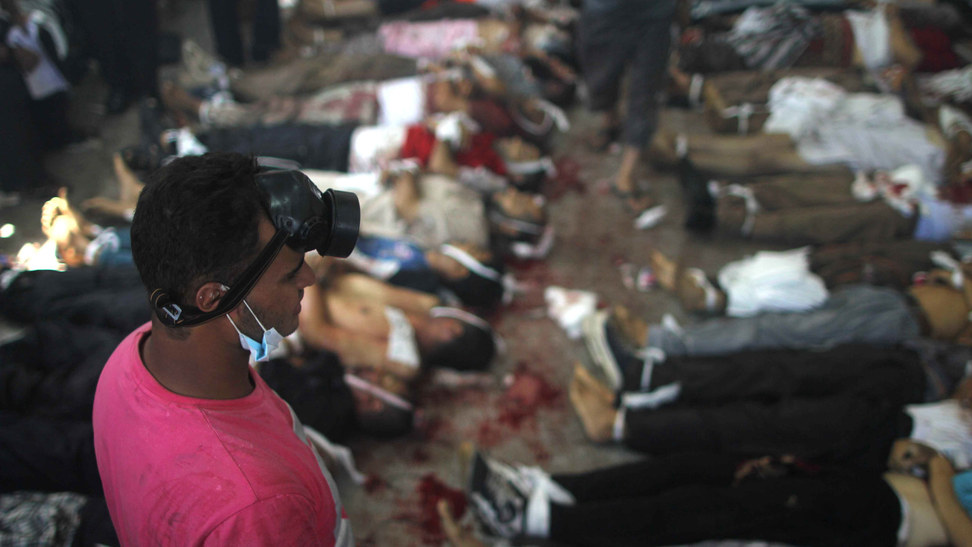 533 people died as a result of the forcible dispersal of the Rabaa Al-Adaweya and Al-Nahda encampments set up in support of ousted President Mohamed Morsi, according to the Forensics Authority spokesman Hisham Abdel Hameed.

Abdel Hameed told private satellite channel Al-Hayah that 333 people were killed during the Rabaa sit-in dispersal on 14 August. The dead included 52 unidentified bodies and seven policemen. Abdel Hameed added that 173 bodies kept at Al-Iman Mosque close to where the Rabaa sit-in was held were “examined by sight” by the Ministry of Health’s inspectors.

During the dispersal of Al-Nahda sit-in in Giza, also on 14 August, Abdel Hameed said 27 people were killed, with the death toll including two policemen and five unidentified bodies. He added that the forensics performed an autopsy for 11 bodies who were subjected to torture, all picked up from the vicinities of the Rabaa and Al-Nahda sit-ins.

The forensics spokesman added that the Republican Guards clashes which took place between Morsi supporters and security personnel on 8 July left 61 people dead.

Abdel Hameed noted that the state’s official Zeinhom morgue can only accommodate 110 bodies at a time, prompting the Ministry of Justice to provide refrigerators after the Rabaa sit-in dispersal to store the bodies of those killed in the clearing. He called on the authorities to expand the morgue’s capacity so that it can accommodate up to 300 bodies at a time.

Wiki Thawra, a website dedicated to documenting the Egyptian revolution, put the latest death toll of the Rabaa sit-in dispersal at 904: 869 civilians, seven security personnel and 28 bodies found under the Rabaa platform. It also reported that 95 people were killed as a result of the Al-Nahda sit-in dispersal; 87 civilians, one security personnel and seven bodies buried under Al-Orman Garden.

Wiki Thawra was established by a group of independent youth. Its data mainly depends on reports by independent civil society organisations such as the Egyptian Centre for Economic and Social Rights (ECESR), the Hisham Mubarak Law Centre (HMLC), and the Front to Defend Egypt’s Protesters (FDEP).