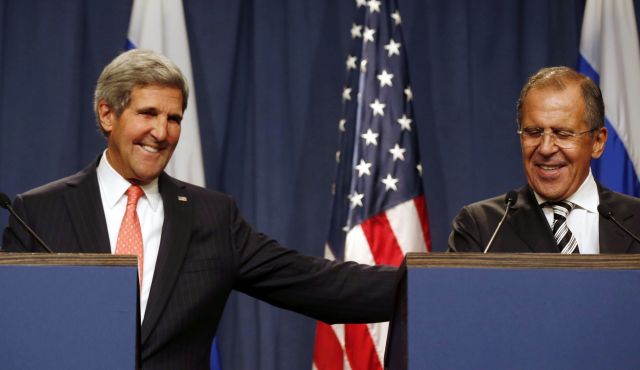 AFP – A US-Russian plan to remove Syria’s chemical weapons is a “victory” that averts a war, a Syrian minister said Sunday, as Washington’s top diplomat briefed Israel about the landmark deal.

“On one hand, it helps the Syrians emerge from the crisis and on the other it has allowed for averting war against Syria…,” Minister of State for National Reconciliation Ali Haidar told Russian news agency Ria Novosti.

“It’s a victory for Syria that was achieved thanks to our Russian friends.”

His remarks came as US Secretary of State John Kerry met Israeli Prime Minister Benjamin Netanyahu to brief him on the plan to eradicate Syria’s chemical weapons.

Washington is seeking to bolster international support for the agreement inked in Geneva on Saturday, which demands action from Damascus within days.

The ambitious plan to dismantle and destroy Syria’s chemical arms stockpile — one of the largest in the world — by mid-2014 was thrashed out during three days of talks in Geneva between Kerry and his Russian counterpart Sergei Lavrov.

It gives Syrian President Bashar al-Assad a week to hand over details of his regime’s arsenal of the internationally banned arms in order to avert unspecified sanctions and the threat of US-led military strikes.

It also specifies there must be immediate access for arms control experts and that inspections of what the US says is some 45 sites linked to the Syrian chemical weapons programme must be completed by November.

The deal won the backing of China, a veto-wielding permanent member of the Security Council, which like Russia has vetoed several UN resolutions on Syria.

“This agreement will enable tensions in Syria to be eased,” Foreign Minister Wang Yi told his visiting French counterpart Laurent Fabius who will meet Lavrov on Tuesday in Moscow.

It was also welcomed by German Foreign Minister Guido Westerwelle, who said: “It is important, however, that it be put into practice.”

Arab League chief Nabil al-Arabi called the deal “a step closer to a political solution” to the conflict.

Ahead of Sunday’s Kerry meeting, Netanyahu said he hoped the accord would see the complete destruction of the Damascus regime’s chemical weapons.

“We hope that the Russian-US agreement on Syria’s chemical weapons will bear fruit but the real test will be in its implementation: the full dismantling of the regime’s chemical weapons stockpile,” he said at a ceremony marking 40 years since the Yom Kippur War.

Israel has voiced alarm at the use of chemical weapons inside Syria because of the potential fallout for Israelis across the border.

Some Israeli commentators raised the question of whether Washington would lean on Israel to ratify the international treaty banning the use of chemical weapons.

Israel signed the Chemical Weapons Convention in 1993 but never ratified it, despite demands to do so from Washington and Moscow.

The Syrian rebels, fighting to oust Assad since March 2011, have rejected the deal, warning it would not halt the conflict that has killed more than 110,000 people and displaced millions.

“Are we Syrians supposed to wait until mid-2014, to continue being killed every day and to accept (the deal) just because the chemical arms will be destroyed in 2014?” asked Free Syrian Army chief General Selim Idriss.

But in Damascus there was a flicker of hope the end of the devastating 30-month conflict may be in sight.

“We have more hope now, after this agreement. We might be able to see an end to terrorism and the troubles that we’ve had no part in creating,” beauty salon owner Muna Ibo said.

France has so far been Washington’s closest ally as it has sought to build support to punish Syria for using chemical weapons.

The Paris leg of Kerry’s diplomacy will come the same day as the United Nations is due to release its investigation of an August 21 attack near Damascus.

President Barack Obama welcomed the US-Russian deal, but said the pressure was now on Assad to deliver.

And he warned that Washington, which has threatened military strikes against Syria in response to last month’s chemical attacks, “remains prepared to act”.

Kerry said the joint plan would be encapsulated in a Security Council resolution drawn up under Chapter Seven of the UN charter, which provides for enforcement through sanctions, including the possible use of military force.

But with Russia strongly opposed to the use of military threats against its long-term ally Syria, and also wielding a veto on the Council, Kerry acknowledged it would be up to debate in the Security Council over what sanctions to impose.