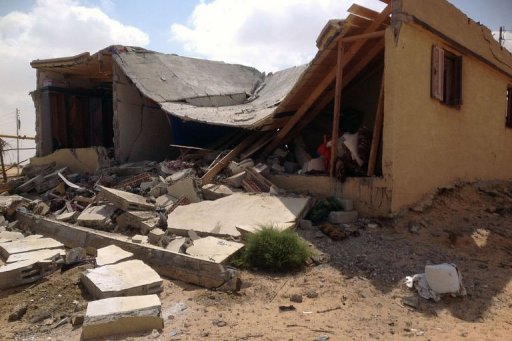 A jihadist group has accused the armed forces of carrying out a massacre in the village of Lufaytat in North Sinai.

Ansar Beit Al-Maqdis accused the army of killing seven people, including four children under the age of 10 in a statement published on Sunday. The group claims that army tanks caused these deaths by firing shells and running over those killed, crushing them to death.

The army moved into the village with 30 tanks before Friday prayers on 13 September, said the group’s statement. “The tanks fired shells at houses randomly without a reason,” it read, adding that no shots were fired at the army and there was no provocation for the alleged attack. “It was clear that the mission of this campaign… was destruction,” said Ansar Beit Al-Maqdis.

The jihadist group vowed that its response to the “criminal and apostate army…  will be painful.”

A military source denied that these events took place, stressing that the armed forces “does not attack women and children.” He added, “Why did they not release a statement on Friday or Saturday? Why did they wait until after Colonel Ahmed Ali’s press conference?”

Ansar Beit Al-Maqdis claimed responsibility for the recent failed assassination attempt on Minister of Interior Mohamed Ibrahim, although the Ministry of Interior doubted this claim.