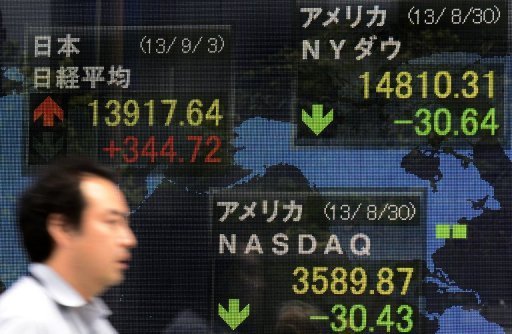 AFP – Asian markets rallied on Monday as fears of an attack on Syria receded after the United States and Russia agreed a deal for the Assad regime to give up its chemical weapons.

Buying was also boosted and the dollar was lower after Larry Summers, the hawkish former treasury secretary was tipped to be named Ben Bernanke’s successor as Fed chairman, withdrew from the race.

Trade remained cautious, however, before a two-day meeting at the US Federal Reserve at which policymakers are expected to begin winding down the bank’s stimulus programme.

Tokyo and Kuala Lumpur were closed for public holidays.

Damascus said at the weekend it would commit to a plan to eradicate its chemical weapons after a deal brokered by Russia and the United States that may avert a threatened attack by US forces.

US Secretary of State John Kerry and his Russian counterpart Sergei Lavrov announced the deal Saturday that provides for Syria’s toxic arsenal to be destroyed by mid-2014.

Global markets were sent into a tailspin last month on expectations of a US-led strike that fuelled fears of a wider conflict in the Middle East.

Attention this week is on Washington and the Fed’s plans for its $85 billion a month bond-buying scheme. With most economists betting the bank will announce a reduction of its purchases, the key issue is how quickly and by how much it will “taper”.

Markets were taken somewhat by surprise after Summers decided to withdraw from the race to become the next Fed boss, citing fears of an “acrimonious” confirmation process.

The two other top contenders for the post – vice chair Janet Yellen and former vice chair Donald Kohn – were architects of the Fed’s bond-buying and supporters of the approach laid out by Bernanke. Summers was considered more hawkish towards the so-called quantitative easing scheme.

“Markets will take confidence from the view that a Yellen Fed is unlikely to put much pressure on economic growth rates by withdrawing monetary stimulus too soon,” Ric Spooner, chief market analyst at CMC Markets, told Dow Jones Newswires.

Asian stocks down on Takata’s US deal