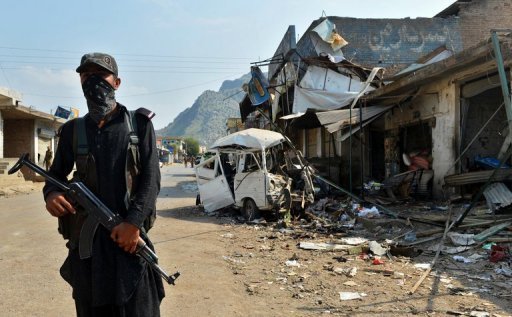 The statement from General Ashfaq Kayani came a day after two senior military officers were killed by a Taliban bomb in the northwestern province of Khyber Pakhtunkhwa, where the military is fighting Al-Qaeda and Taliban-led militants.

Tehreek-i-Taliban Pakistan Sunday announced preconditions for any peace talks, saying troops must be withdrawn from the tribal areas and its prisoners released.

“It is understandable to give peace a chance through a political process but no one should have any misgivings that we would let terrorists coerce us into accepting their terms,” Kayani said.

But Kayani warned that militants “will not be allowed to take advantage of it [offer of talks].”

The army, he said, “has the ability and the will to take the fight to the terrorists.”

On Sunday seven security personnel including a major-general and a lieutenant-colonel died in four separate attacks.

Major-General Sana Ullah Khan was general officer commanding in the Swat valley, where the army sent 30,000 troops in 2009 to expel Taliban fighters.

Previous peace deals with the Taliban have quickly broken down and been sharply criticised for allowing the extremists time to regroup before fresh attacks.

Pakistan says more than 40,000 people have been killed in bomb and suicide attacks staged by the Taliban and Al-Qaeda-led militants who oppose Islamabad’s US alliance.