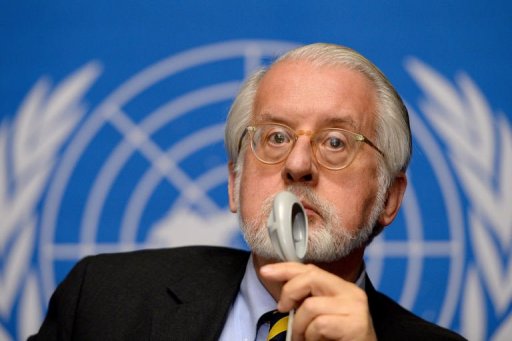 AFP – UN-mandated human rights investigators said Monday they were probing 14 alleged chemical weapons attacks in Syria, but said they were still unable to pin the blame on either side.

Pinheiro told reporters that given the difficulties in gathering evidence, it was not possible immediately to establish responsiblity for the attacks, committed since the inquiry team started its probe in September 2011.

The four-member commission, which also includes former war crimes prosecutor Carla del Ponte, has been refused access to Syria by the regime of President Bashar Al-Assad.

As a result, its investigation methods include meeting with Syrian refugees and carrying out telephone and Skype interviews with those in the country.

Pinheiro said the team was also poring over videos of chemical attacks in Syria and had received input from military experts.

Despite being unable to say who had deployed chemical weapons, Pinheiro earlier told the UN Human Rights Council that their use was clearly a war crime.

But he said that amid the global focus on Syria’s chemical weapons, the use of deadly conventional arms should not be sidelined.

“The vast majority of the conflict’s casualties result from unlawful attacks using conventional – I repeat, conventional – weapons such as guns and mortars,” he told the council.

Under pressure over a 21 August chemical attack which the Syrian government’s opponents say claimed over 1,400 lives, the Assad regime has signed an international treaty banning such arms.

Meanwhile, the United States and Syria’s ally Russia on Saturday struck a deal requiring Damascus to provide a full inventory of its chemical weapons within days, and to allow inspectors into the country by November with a view to removing and destroying the arms by mid-2014.

The civil war in Syria, which erupted in March 2011, has claimed more than 100,000 lives and driven over two million refugees abroad, while millions of others have been displaced inside the country.