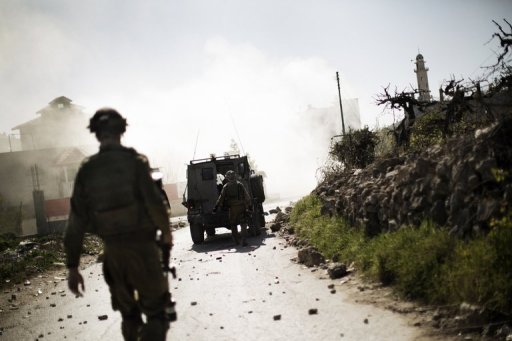 AFP – Israeli troops Tuesday shot and fatally wounded a suspected Palestinian militant during a raid on his home in a West Bank refugee camp, the army and Palestinian security officials said.

“The wanted suspect was injured, evacuated by military forces for further treatment and later died of his wounds in an Israeli hospital,” a military statement said.

Palestinian security sources named the dead man as Islam al-Tubasi, 21, and said he was shot as troops stormed his home in the Jenin refugee camp, north of the West Bank city of Nablus.

The sources had no information on whether he was engaged in militant activity but Islamic Jihad told AFP he was a member of that group.

The army statement said that as soldiers tried to arrest Tubasi, a crowd gathered and attacked them with firearms, petrol bombs and improvised explosives.

“Amidst the turmoil, the target of the activity was identified attempting to flee the area. The security forces managed to detain the suspect using live fire,” the English-language statement said.

It said troops also shot and wounded one of the rioters, who was taken to an Israeli hospital.

“The ongoing terrorist threat from the Jenin Area requires that the IDF maintains operational access in the area,” army spokesman Lieutenant Colonel Peter Lerner, said in the statement.

“The attack against the (Israeli) forces warranted a forceful response in self defence. The (military) will review the circumstances of the shooting that led to the death of the terror suspect.”

A spokesman for Islamic Jihad told AFP a few hours later “Islam al-Tubasi, one of our number in Jenin, was killed in cold blood as the Zionist occupation let him bleed to death.”

Tubasi’s brother, who had been active in Islamic Jihad, was also shot dead by troops in 2006, the Palestinian security sources said.

It was the latest in a string of violent incidents in refugee camps in recent weeks.

On August 26, Israeli security forces shot dead three Palestinians and wounded 19 during fierce clashes that lasted for hours in the Qalandiya camp, between Ramallah and Israeli-annexed east Jerusalem.

The violence erupted when a crowd of about 1,500 spotted a border police squad raiding the home of an alleged militant in the camp and attacked them with rocks and fire bombs.

The deaths lead to the postponement of a session of Palestinian-Israeli peace talks that had been scheduled for that afternoon, a Palestinian official said.

The week before, troops shot dead one man and wounded two during an operation to arrest an alleged militant Palestinian militant in Jenin camp.

Last week soldiers and Palestinians exchanged fire at the Balata camp, in Nablus, as troops escorted Jewish worshippers to a to a flashpoint shrine there.

There were no fatalities in that incident, but four Palestinians were wounded, two by live fire and two by rubber-coated bullets, Palestinian medical sources said.

The military said that one of those shot was suspected of firing at soldiers.