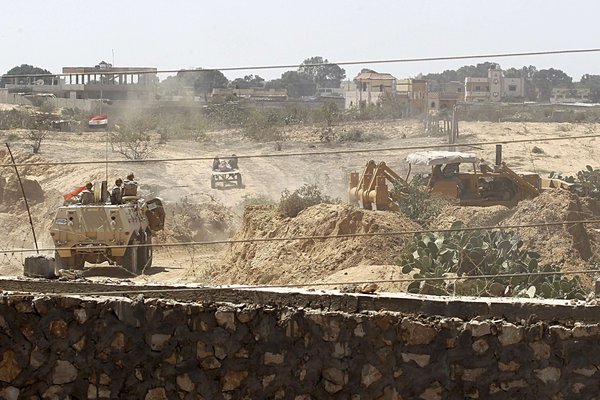 AFP – Gaza rulers Hamas and residents of the Palestinian territory fear Egypt’s destruction of tunnels used to smuggle goods across the border is part of a plan to tighten a blockade of the Strip.

“The Egyptian army has destroyed 95% of the tunnels with the aim of setting up a security buffer zone,” Sobhi Ridwan, head of the Palestinian municipality in the border town of Rafah, told AFP.

“We have big fears of a buffer zone being set up and the tunnels all being shut down,” Barhum said.

Egypt’s army has destroyed many of the tunnels on the Egyptian side of Rafah which are used to smuggle goods, including building material and fuel, into the blockaded Palestinian territory.

Egypt says it is part of a crackdown against Islamist militants in the Sinai Peninsula who have links to extremists in Gaza.

Egypt’s ambassador to the West Bank-based Palestinian Authority, Yasser Othman, told AFP the measures are aimed at tightening security on the border.

“The aim is not to worsen the situation inside Gaza.”

Barhum disputed this, saying the moves had nothing to do with Egyptian security operations in Sinai but rather a way to intensify the blockade and “bring the Palestinian people to their knees”.

Israel, which controls crossings on its borders with Gaza, is to allow cement, iron and gravel into the Strip for the first time in six years starting on Sunday, but the Hamas government said the move is insufficient to ease the blockade.

Hamas’s energy authority has warned its sole power station faces closure due to the lack of fuel entering the Strip since Egypt began destroying the tunnels.

The tunnels’ destruction, which began after Egypt’s army in July ousted president Mohamed Morsi of the Muslim Brotherhood, a Hamas ally, has already affected residents of Rafah.

Basel Taha, a man in his 30s who worked guarding a now-defunct tunnel through which building materials were brought into Gaza, said the move had “destroyed the lives of hundreds of workers”.

“I don’t have even one shekel (25 cents, 20 eurocents) to spend on my children’s schooling. I think night and day trying to find a solution but I can’t. Death is better than this,” he told AFP.

A 40-year-old man who requested anonymity said he had to help extend a tunnel from 400 metres in length to 1.5 kilometres to try to avoid the demolitions, but the Egyptian army found the new exit and destroyed it.

Bulldozers on the other side of barbed wire fences, within sight of Palestinian residents of Rafah, mow down trees, sand banks, tents and even houses that sit over the tunnel entrances on the Egyptian side.

“They’ve destroyed 700 tunnels for the buffer zone,” said Abu Taha, a 30-year-old in charge of a tunnel used to smuggle in fuel.