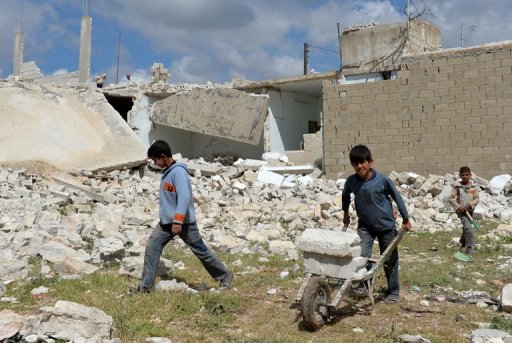 AFP – Rebels of the mainstream Free Syrian Army (FSA) have agreed a truce with jihadists who seized a town on the Turkish border earlier this week, a monitoring group said Friday.

The Northern Storm brigade, which is loyal to the FSA and was based in Azaz, and Al-Qaeda front group the Islamic State of Iraq and the Levant (ISIS), which seized the town on Wednesday, both pledged to observe a ceasefire, the Syrian Observatory for Human Rights said.

The deal was brokered by Liwa al-Tawhid, a powerful rebel brigade loyal to the FSA, which sent fighters to the town on Thursday who have deployed between the two sides, the Observatory said.

The rival groups also undertook to free detainees captured in Wednesday’s fighting and to immediately return any goods looted from the other side.

They agreed that any future problems that might emerge be dealt with by an arbitration committee, the Observatory added.

Azaz was one of the first towns to be overrun, in July 2012, by FSA rebels, who set up their own administration.

Tensions have spiralled between some mainstream rebel groups and ISIS in recent months, especially in northern Syria, where the opposition controls vast swathes of territory.

Several local groups resent ISIS’s growing territorial control, its steady supply of arms, as well as its brutality, which opponents often compare to that of the regime’s.

ISIS, on the other hand, has accused some rebels affiliated with the FSA’s Supreme Military Command of collaborating with the West and of being “heretics”.

The opposition National Coalition issued a rare condemnation of ISIS on Friday, accusing the group of violating the principles of the revolution by turning its guns on FSA fighters.

It accused the group of “repeated repressive practices against the freedom of civilians, doctors, journalists and political activists in recent months”.