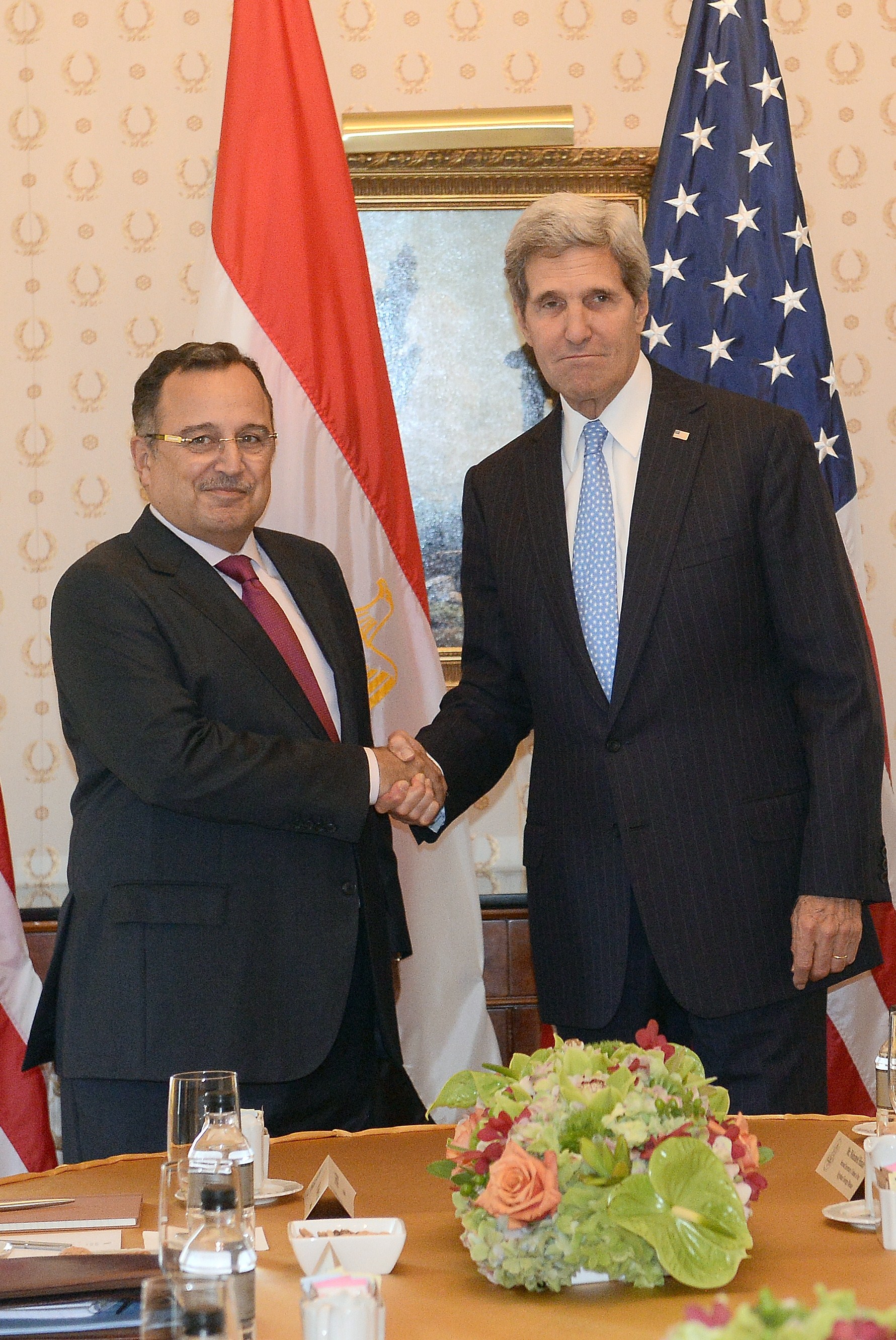 Egyptian Minister of Foreign Affairs Nabil Fahmy met with a wide range of his counterparts and other diplomats on Monday in New York City, where he is preparing to deliver Egypt’s speech before the 68th United Nations General Assembly.

Fahmy met with British Foreign Secretary William Hague at the UN headquarters to discuss bilateral relations between the two countries, especially British investments in Egypt in the energy sector and revitalization of British tourism in Egypt, particularly in the Red Sea area. The Egyptian minister reiterated the government’s commitment to the roadmap “in spite of the acts of violence and terrorism in the country, which are handled and resolved within the framework of the law.” They also discussed Syria and the importance of moving forward with the Geneva II conference so that ongoing violence in Syria could be resolved in a political context.

The Egyptian foreign minister also met with the Foreign Minister of the People’s Republic of China Wang Yi on the sidelines of UN meetings, in which Fahmy “thanked [China] for its position in support of the will of the Egyptian people,” according to a statement issued by the foreign ministry. The two diplomats discussed strategic partnerships and agreed on the need to provide more support in trade and investment, including the implementation of a project of establishing an economic zone in Suez and the restoration of Chinese tourism in Red Sea areas.

Fahmy and Wang also discussed the Palestinian and Syrian issues and the importance of resolving them on the basis of “legitimate international resolutions,” and the rejection of the use of force in Syria outside the context of the UN, as well as the reforming of the Security Council so that Africa could have proper representation.

The Egyptian Minister of Foreign Affairs also took part in a ministerial meeting with member states of the Arab League to discuss developments in Syria’s civil war and for obtaining an update from UN and Arab League Special Envoy to Syria Lakhdar Brahimi. Palestine and talks between it and Israel were also discussed; Fahmy reiterated Egypt’s “fixed position in support of the right of the Palestinian people to build an independent state on the 1967 borders with East Jerusalem as its capital,” according to a foreign ministry statement.

Fahmy communicated over the phone with members of the United States House of Representatives, including Republican House Majority Leader Eric Canter, Democrat Minority Leader Nancy Pelosi, and Chairwoman of the House of Appropriations Subcommittee on State-Foreign Operations to inform them of domestic developments in Egypt, including the implementation of the roadmap and bilateral relations.

US Secretary of State John Kerry met with Fahmy on Sunday to discuss a number of issues, with a focus on security and political developments in Egypt and the roadmap put in place following former President Mohamed Morsi’s ouster.

Foreign ministry spokesman Badr Abdelatty had told state-owned news agency MENA that Fahmy’s speech to the General Assembly would “explain the principles and goals of the 30 June Revolution, defend it strongly, and will aim to gather political and economic support for [the revolution].”