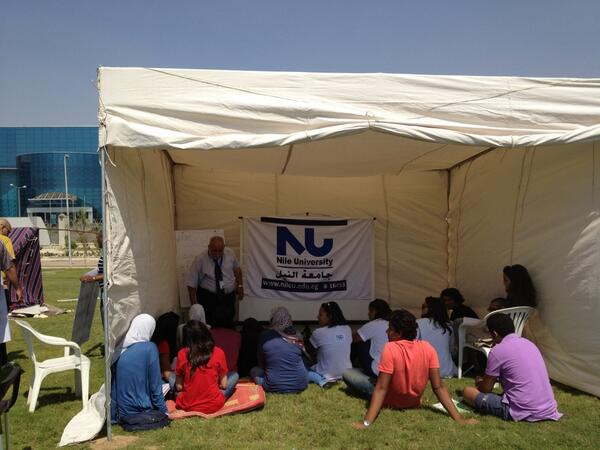 Nile University accused the subsequent governments which ruled over the state of being obstinate towards the conflict of the University with Zewail City.

Nile University has been fighting with Zewail City, established by Nobel laureate Ahmed Zewail, over a piece of land that both universities claim to be their own.

In a press conference held in cooperation with the Association for Freedom of Thought and Expression (AFTE) and the Egyptian Initiative for Personal Rights (EIPR) on Tuesday, Nile University blamed interim Minister of Higher Education Hossam Eissa for failing to carry out his promise to solve the conflict last Thursday.

Fatma Serag, lawyer working with AFTE, said that Eissa has the jurisdiction to implement the court ruling.

“What Eissa claims regarding his lack of jurisdiction is untrue,” Serag said. “Since he, as Minister of Higher Eductation, was party to the legal conflict, he now has the authority to enforce the ruling.”

Representatives from both universities met with Eissa and interim Minister of State for Local Development, Adel Labib, and interim Minister of Housing, Ibrahim Mehleb, last week. At the end of the meeting, most parties except the Zewail City representatives agreed on granting Nile University students access to one of the two contested buildings until a final court ruling is issued regarding the matter.

The next day, Zewail City released an official statement saying it had turned down the proposal. Hanan Ezzat, the city’s communication director, said the legal team feared that it would be illegal to give Nile University students the right to use one of the buildings for an unannounced period of time, since the city would be disposing of public property, which it is not authorised to do.

Serag claimed Zewail City’s legal argument is unfounded. Zewail City cited a presidential decree, issued by ousted President Mohamed Morsi in December 2012, saying that the decree grants it apportionment of the land, which is public property, and thus it cannot dispose of it to a private-owned university.

“This is not true,” Serag said. “The decree only established Zewail City as a legal entity. It never apportioned it the land or the buildings.”

Rafiq Al-Gendy, one of the members of Nile University’s academic committee, applauded the proposal, which was turned down by Zewail City.

“If the land and the two buildings it hosts are disputed, then either both parties should be allowed to use them or both parties should be banned from using them until a final verdict on the matter is out,” Al-Gendy said. “Nevertheless, with the start of the academic years, only Zewail City students are using the buildings while Nile University students are left to suffer.”

Zewail filed an appeal to the Supreme Administrative Court’s verdict to the Supreme Constitutional Court, stating that the Giza Court, which is a civil court, ruled in favour of Zewail City in 2012. He called for stalling the Administrative Court’s decision since it was appealed, but going forward with the Giza Court’s decision because it was not appealed. He also called for a ruling on the two conflicting verdicts.

Ahmed Nassar, head of Nile University’s student union, said; “Zewail City’s only filed the appeal to stall the enforcement of the verdict.” Serag added that legally speaking, the appeal to the verdict cannot be considered because Zewail City filed it at a different court from the court which issued the verdict, which is the Supreme Administrative Court.

Motaz Attallah, a researcher at the EIPR, described the case with Nile University as a violation of students’ right to appropriate education. “The state is mainly responsible for this violation,” Attallah said. “Since April’s verdict, we have not seen any efficient steps by the state to enforce it neither have we seen efforts by Zewail City to reach a practical solution.”

Zewail City proposed an alternative solution “away from the complexities of legal verdicts.” The City offered to contribute to legalising Nile University’s status and giving it a piece of land to build a new campus, saying it could provide EGP 90m for that process.

The proposal was turned down by Nile University under the pretext that it would cancel their “legitimate” claim to the disputed lands.

Attallah called for expanding Nile University’s conflict from its legal frame within the media and society.

Since the Supreme Administrative Court’s decision, Nile University students have not yet been granted access to the disputed buildings. Zewail City accepted 300 students into the contested buildings at the beginning of its first academic year last week. The court is looking into Zewail City’s appeal on Wednesday.