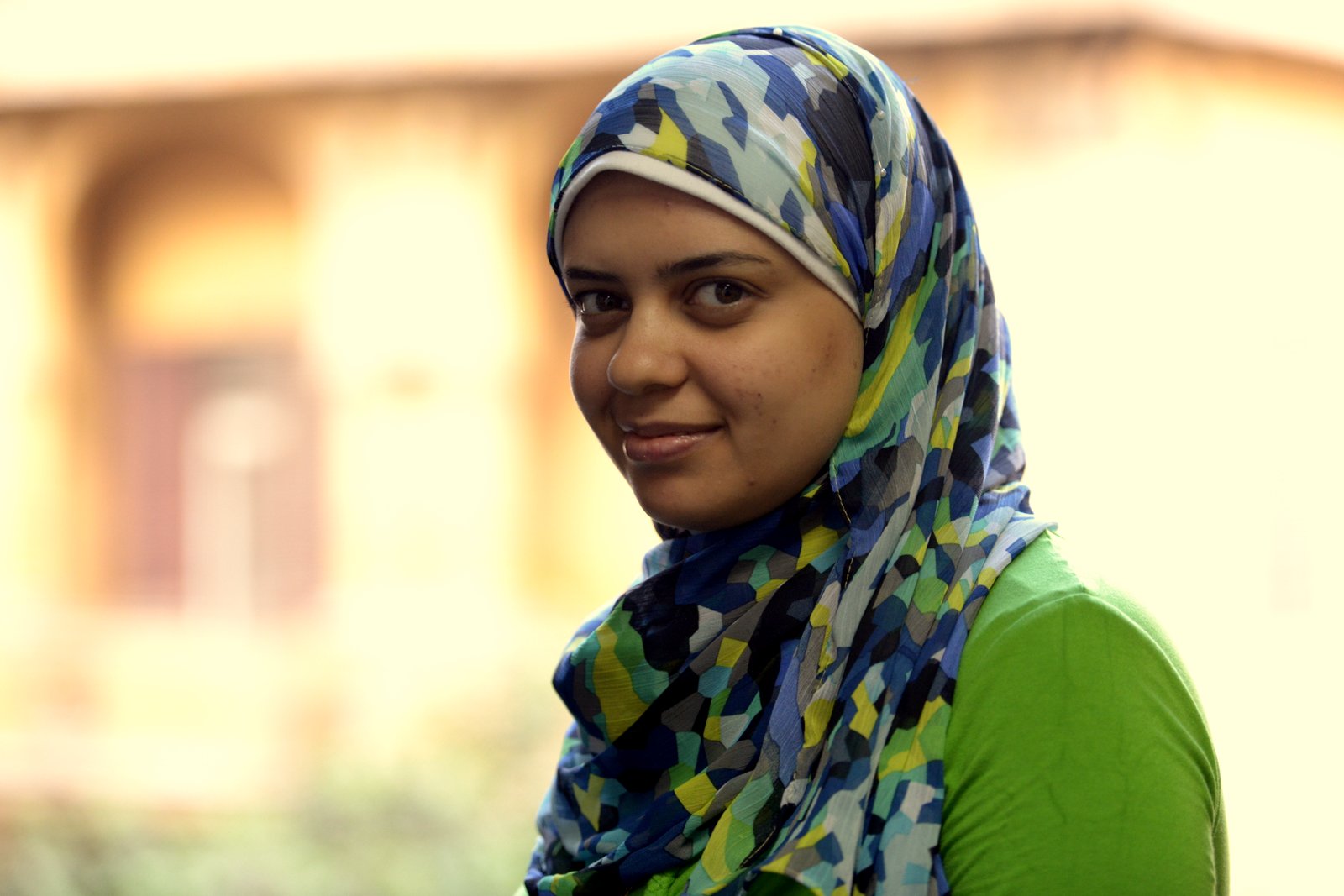 Whether you prefer it in the very classical way or favour the quicker so-called “Spanish” style, the hijab fashion for Egyptian women is changing rapidly. Although veiled females in Egypt  generally coordinate the colours of their veils  with long tunics, maxi-skirts or pants -the average standard of Muslim women’s wear in urban Egypt- many choose their hijabs depending on the colours of their outfits, rather than the style that best fits their faces. Different social class levels are also reflected in various hijab styles. But, regardless of whether females wear hijab as obligatory attire or a social tradition, it is generally common in Egypt to tell which social level a girl belongs to based on the style of her hijab. The colours, the style and the number of scarves can all be signals of an Egyptian girl’s background and general taste.

The majority of women and girls in Egypt wear hijab. The colours and styles are diverse. But, to begin with, the most widespread hijab styles nowadays are a more advanced style of the so-called “Spanish” hijab. It involves simply tying the two ends of the triangular-shaped scarf behind the neck, without attempting to move around the ends, or make a flower-shaped end pinned at the back of the head. “This style has become very popular. It is easy, quick and simple,” said Dina Ahmed, a veiled woman in her mid-thirties with a loose Spanish veil. Having the first five centimetres of her hairline visible before the scarf, Dina prefers to usually wear large round earrings with this style of hijab. “The accessories are very much important to me… I think this new Spanish hijab is more or less the simplest and most classy look for a veiled lady in Egypt… It is very light in the summer as well,” she says. Dina explains that this style allows the woman to show the design of the collar of her blouse or the shape of her cardigan, better than a traditional hijab style does. Especially for working women, she says, the Spanish hijab turns out best so far. With this Spanish hijab, a woman does not need to wear a bonnet, which is a tight piece of cotton/synthetic cloth that is dressed under the external scarf to prevent it from wobbling. Dina, who considers herself a woman from the upper middle class, believes that females of lower social segments use the “Spanish” style differently.

Three colours for one hijab

Nora Mohamed, a child minder who works in a nursery in the Mohandessin neighbourhood in Cairo, agrees. As she sits to talk, Nora is wearing tight light blue jeans and a green, skin-tight shirt with long sleeves. On her head, one could notice that there are almost three different colours of veils tied around her head. Nora explains that she is used to wearing more than one scarf at a time to be able to make her own style of the “Spanish” hijab. Putting two scarves over each other allows Nora to make a combination of colours at the end of the wrap. This style, which usually ends up with two tails, is used to make a special shape at the back of the head or at one of the shoulders. “I use the new fluorescent colours that are going trendy these days. I may use a black one with a yellow phosphoric to pair the ends of the scarves together,” Nora says. She adds that she and her friends usually sit together to try new ideas with the “Spanish” styles of hijab to appear “more attractive and beautiful.”  “There are different designs of this Spanish style, but I believe the best [way] is to use more than one colour to be able to match with your clothes,” she says.  As for her opinion with regards to the newer Spanish style, Nora says she is not used to simply tying the two ends of the scarves without creating a shape. “It looks pale. I love to make flower shapes with the four ends… It looks lovely.” The name of the “Spanish” hijab comes from the hairdo of Spanish flamenco dancers. It doesn’t cover the neck, as the traditional hijab does. Therefore, some women do not consider it a proper way of wearing the veil.

Triangular veils are the most demanded

Shopping for veils has become one of the easiest tasks in the last couple of years. In a standard shopping mall in Egypt, women go in and out of at least five stores or booths that specialized in selling all kinds of veils and their accessories. Veil prices can start from EGP 25 and exceed EGP 150. Amira Mohsen, a saleswoman in one of the most popular veil stores in Cairo, says most women nowadays buy the triangular shaped scarves, which are used for the simple Spanish hijab. “The price of a triangular veil can range from EGP 35 to EGP 65. Such scarves usually end with beads or colourful buttons.” She adds that many girls are also interested in buying scarves in florescent colours that have blown out since last summer.  Heba Osman, who is in her late twenties, said she prefers the traditional style of hijab, but with “some minor changes every now and then.” She explains that the Spanish style “if worn properly” would also be suitable on some occasions. Heba agrees with the theory that the ways women wear their veils reflect their social backgrounds. “In lower classes, girls use very vibrant colours in more than one scarf. They also wear their veils over very tight tops and pants. They deal with hijab not for its religious meaning, but as a part of a general look.” As for the upper social class females, Heba says they are trying “so hard” to stay in fashion, because “the styles of clothes for veiled women are not so tempting and mostly unsuitable.”

The traditional hijab can be worn in different shapes. Some women wear the veil around their face in a tight style pulled right back under their chin, leaving their jaw jutting out. This is called the Turkish style hijab, which entails a square scarf pinned under the chin, leaving the face looking like a triangle. Some women wear an cap or under scarf under the external scarf, which they pull down to the forehead. According to the misshijabi blog, which is specialized in hijab fashion and written by an Australian woman who converted to Islam, the Turkish style hijab is not recommended for a square face, as it “just makes your jaw line look even more masculine… It seriously just pushes out a square jaw and loses all femininity instantly.”  She recommends that square faces should “frame the chin and the sides of the jaw line with a nice scarf to give a more rounded/oval appearance.” As for females with round faces, they should not wear any under caps under the veils, unless they are hidden, and should also avoid the Egyptian Spanish styles of hijab, because they expose the neck and chubby face. The blog gives advice for triangular faces, stating that loose hijab styles are more suitable for women of this face shape, as veil does not tightly frame the face. The blog states that any hijab style can suit women with oval faces.

There is also the camel hump hijab. This is the Khaleeji style hijab, which is worn by most ladies in the Gulf region. Some females in Egypt tie their hair up in a pony tail with hair clips, and then place layers of scarves on their head. The veil does not tighten around their faces, and looks like a camel hump over their heads. In the Gulf, some argue that this style of hijab is worn as a sign of female rebellion, but others think it is only a fashion statement, with which they show off some of their hair.  There are religious positions regarding the camel hump hijab, which refer to one of the sayings of the Prophet Muhammad, which states that this style of hijab is banned in Islam.  Fatma Al-Mahdy, a housewife and mother, says she doesn’t like the camel hump hijab as “it gives more of a Khaleeji identity. However, some girls in Egypt are trying to copy those in the Gulf.” Commenting on the different styles of hijab in Egypt, Fatma believes that the traditional veil is the most suitable for all girls and women, regardless of their age and social class. “But, eventually, veil is a matter of taste. It also involves the taste of a woman in the colour selection and coordination with what suits her face and body. Spanish can be acceptable in occasions,” she says.

Shaimaa Hosny, who works as a hairdresser in one of Cairo’s largest beauty salons, explains what the trendiest veils are for girls on weddings and other occasions. “Spanish comes at the top. We rarely make a traditional white veil for a bride, unless she asks for it, and that usually comes when she is having her wedding at home in a small party.” Almost all veiled brides in Egypt wear the Spanish hijab style at their weddings, but decorated with different accessories. “Some use a sparkly tiara on top of the veil, others users some shimmering buttons around the shape we make with the veil. It all ends up in the way that fits the bride’s face.”  Shaimaa, who meets up to 20 brides a month, explains that she takes about 30 minutes to dress a bride with her white Spanish veil. Many, however, decide to take the veil off completely at their weddings, but keep their white dresses with long sleeves.  The same goes for engagement parties. Almost all brides use glittery scarves with under caps and external layers to “create a shape with their veil.” over their heads. “The veil definitely has to match with the dress and its colour. All shapes fall under the Spanish. I think the traditional hijab style will fade out soon,” she says.