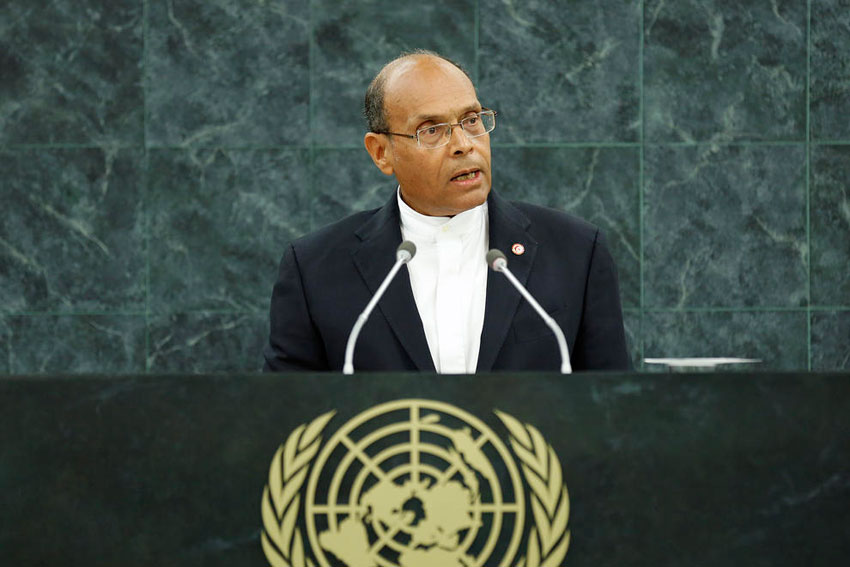 The Egyptian Ministry of Foreign Affairs rejected and condemned statements made by Tunisian President Mohamed Moncef Marzouki during a speech delivered to the United Nations General Assembly on Thursday.

In a statement released on Thursday night, the ministry alleged Marzouki had called on Egyptian authorities to release “what he described as political prisoners”. It added that all statements made by Marzouki to the General Assembly regarding Egypt are not true. It challenges the will of the Egyptian people who took to the streets in millions on 30 June calling for a true democratic state which excludes no one, the statement read.

“We hope the same destiny for our brothers in Tunisia,” the statement read. “Some people remain intent on forcing a certain model which fails to reflect the true nature of the pious Tunisian society.”

During his address to the General Assembly, Marzouki called on Egyptian authorities to release ousted President Mohamed Morsi, suggesting that his release will “help end the political tensions and stop the violence”. He also urged all parties to return to dialogue.

Marzouki used Egypt as an example to prove that creating democracy and civil institutions was “replete with difficulties”.

The Tunisian president stated that though it’s not possible to achieve the uprisings’ entire agendas overnight, states were on “a road to brighter horizons” regardless of the time it would take them to fully control the revolutions. Addressing the possibility of the failure of the “Arab Spring”, Marzouki called on the international community to “insist on supporting the current path”, describing it as its duty.

Egyptian interim Minister of Foreign Affairs Nabil Fahmy also addressed the situation in Egypt in a speech made to the Group of 77 during a meeting held on the sidelines of the General Assembly session on Thursday. A statement released by the ministry cited Fahmy saying that Egypt is going through an “exceptional” circumstance, which cannot negatively influence its international role.

Fahmy stated that the Egyptian people took to the streets in January 2011 to revolt against a corrupt regime and call for certain demands. They returned to the streets on 30 June, Fahmy added, to revolt once again against another regime which failed to achieve any of their demands.

Fahmy said the rule of the Muslim Brotherhood regime is over, adding that all Egyptians are now taking over matters. He stressed Egypt is keen on seeing through the roadmap agreed upon by “all political movements” and announced by General Commander of the Armed Forces Abdel Fatah Al-Sisi. He added that the roadmap would turn Egypt to a “civilian, democratic state which implements social justice”.

The foreign minister cited economic and security challenges he said Egypt is facing as a result of a “terrorist campaign which aims to shake [Egypt’s] stability”. He said Egypt looks forward to the support of its neighbours and friends in helping it surpass this critical stage, adding that some countries have already lent a helping hand.

The situation in Egypt was also addressed by other speakers in the General Assembly session on Thursday. Donald Ramotar, President of the Southern American country Guyana, described what happened in Egypt as a “coup”, saying it was “a blow to democracy that led to violations of human rights and more social unrest”. Manuel Nhamajo, transitional President of the African country Guinea-Bissau, hoped that “dialogue and diplomacy would prevail in Egypt and Syria”. Similar hopes were reiterated by the African republic Burundi’s Minister of Foreign Affairs Laurent Kavakure, who encouraged parties in Egypt, as well as the Democratic Republic of Congo, the Central African Republic and Syria, to “go to the negotiation table”.

Fahmy is scheduled to deliver Egypt’s speech to the 68th UNGA meeting on Saturday. The ministry spokesman said that Fahmy’s speech would “explain the principles and goals of the 30 June Revolution, defend it strongly, and will aim to gather political and economic support for [the revolution].”