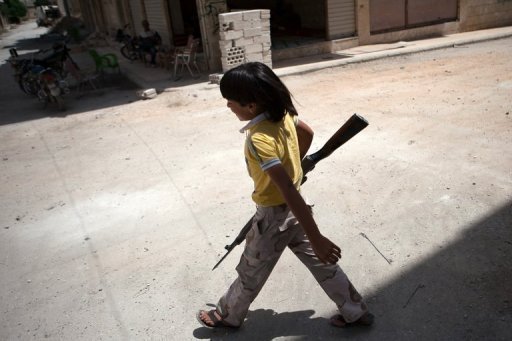 AFP – The head of the key Syrian opposition National Coalition, Ahmad Jarba, has denounced extremists he said were trying to “steal our revolution”, and blamed the regime for supporting them.

He made the comments in an address in New York to representatives from the Friends of Syria — international backers of the rebels seeking to overthrow President Bashar al-Assad.

“The phenomenon of extremism appeared with the support and planning of the regime, which has gambled on the transformation of a revolution for freedom into a civil and sectarian war,” he added.

The Syrian regime “created and armed numerous terrorist organisations and left them a place in the regions from which it has been removed,” he said.

“Other groups have come across the borders to steal our revolution.”

An unknown number of foreign fighters has streamed into Syria to join jihadist rebel groups such as the Al-Qaeda-affiliated Al-Nusra Front and Islamic State of Iraq and the Levant (ISIL).

They include fighters from Europe, the Middle East and Chechnya.

Rebels initially welcomed the jihadist groups and the foreign fighters who joined them, eager for weapons and battle experience.

But in recent months, relations have been tense, particularly between ISIL and non-jihadist rebel factions, which have clashed on occasion.

This week, some of the biggest non-jihadist battalions formed an alliance that includes Al-Nusra, and announced their rejection of the Coalition that Jarba heads.

He told the meeting, on the sidelines of the UN General Assembly, that extremism “has increased because of the indifference of the international community, which has failed in its duties to the Syrian people”.

The opposition has repeatedly called on its international backers to provide it with weapons, but the West has been reluctant to do so for fear of the arms falling into the hands of groups such as Al-Nusra, which is listed as a “terrorist” organisation by much of the West.

Despite setbacks, Jarba insisted that the only solution to the conflict would be Assad’s departure.

“There is no horizon for the Syrians before the fall of the regime,” he said.

“When it goes, Syrians will regain their freedom and civil peace and harmony will be restored.”