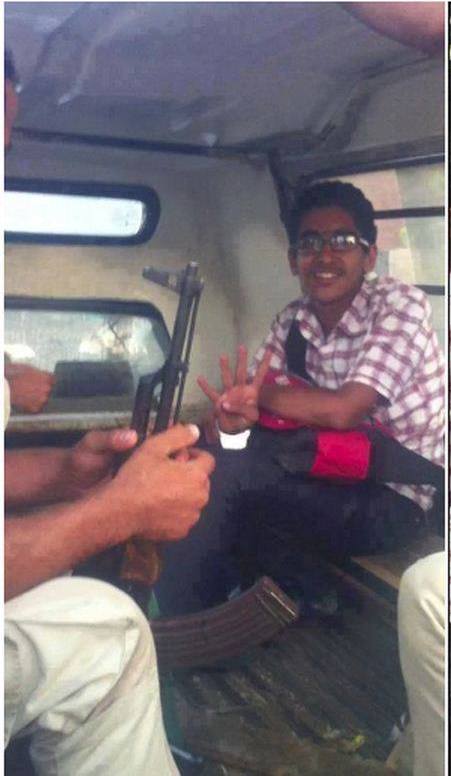 Yehia Afify, a 14-year-old student from the Kafr Al-Sheikh governorate, was arrested Thursday outside his school and detained for a day after presenting anti-army sentiments.

Afify told Qatari news channel Al-Jazeera Mubashir Misr that he had planned a protest at his school’s playground on Thursday with other students, reported Ikhwanonline, a Muslim Brotherhood news website. The protest was reported to the police by the school headmaster, Afify added; he was taken to the Borollous police station in Kafr Al-Sheikh.

The Ministry of Interior’s media office stated Afify was accused of “distributing anti-army and anti-police flyers.” Afify told Al-Jazeera that at the time of his arrest, he was in possession of papers with the words “[General Commander of the Armed Forces Abdel Fatah] Al-Sisi is a traitor” and “down with the military rule” written on them.

Fady Wagdy, lawyer at the Egyptian Coalition for Children’s Rights (ECCR), said that the accusations Afify was charged with are not legitimate.

Shawky claimed Afify was detained in school by a number of teachers before they turned him in to the police. 6 April Youth Movement in Kafr Al-Sheikh issued a statement condemning Afify’s arrest and calling for his release.

The movement described Afify’s arrest as a “methodology” used by the authorities under the pretext of the state of emergency, which is currently in effect. The state of emergency is expected to expire around mid-November. 6 April stated that the security forces’ actions resemble those of ousted President Hosni Mubarak’s regime.

Wagdy stated that several minors have been arrested on the backdrop of protests held in support of Morsi. He specifically cited protests aimed at stopping the metro traffic two weeks ago. Two of the five protesters arrested in Shubra for taking part in the protests were minors, one of them 15 years old. They both remain in detention until time of print.

Afify is a preparatory school student studying at the Sidi Fatah School in Balteem, Kafr Al-Sheikh. An arrest warrant was issued for his father, who is currently a fugitive, reported Al-Ahram.