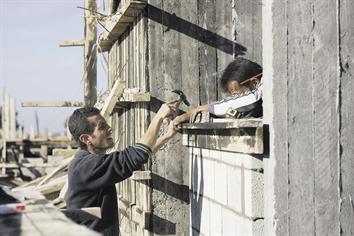 The profits reported by many leading companies in Egypt’s construction sector indicate that it has overcome the economic and political struggles.

The latest of these companies was  Aldekhela Steel, registering EGP 321m in the first quarter of this year compared to EGP 163m during the same period last year, according to an official report issued on 26 September.

The head of the construction materials division at the Cairo Chamber of Commerce, Ahmed El-Zeiny, does not believe that the profit accomplishment of construction companies was due to their success in rising above the market struggles, but rather, to the government’s decision to impose preventive fees on imported steel.

“After the government’s decision, international competition was eliminated and companies took advantage of this ruling and raised their prices. This obviously benefited them and raised their profits,” said El-Zeiny. He added: “The prices of  a tonne of steel were EGP 4000 and thereabouts  but after this decision, prices increased to EGP 5000 and more.”

El-Zeiny said that this decision lasted for 200 days after it was imposed at the end of December 2012. He added: “Construction companies have requested a renewal in the decision.”

In the semi-annual financial report for the Delta Construction and Rebuilding Company, profits registered EGP 3.79m in the second quarter of 2013, compared to EGP 0.79m during the same period last year.

The company’s financial report also illustrated that the company’s total unconsolidated profits stood at EGP 5.47m, a notable 220% increase in profits compared to the EGP 1.7m during the same period of the preceding year.

Medhat Stephanos, the executive vice president of Titans Cement, explained these increases and said that many construction companies could be returning to the profit levels of the pre-revolution period.

“The future of the economic development of a country is reflected in the construction sector, so once we witness a true and steady progress in this field, we can state that the economy is picking up,” Stephanos added.

The company added that this is a 3% surge above the pre-revolution levels.

In its official report, the company said that the outlook for the market remains cautiously positive, with an expected progressive restart in demand in both the public and private sector, after the political situation prevails.

“The energy situation is expected to remain clouded by a growing supply shortage, [which is] likely to affect cement production,” Suez Cement added.

Regarding whether or not the construction sector can flourish in the near future, El-Zeiny said:  “Fair competition will allow the market to thrive. There are several upcoming private and governmental construction projects.”

The banking sector was also able to overcome the financial struggles in Egypt, even with several credit agencies downgrading the country’s credit rating.

Banks such as the Faisal Islamic Bank (FIB), National Societe Generale Bank (NSGB), Credit Agricole Egypt and the Commercial International Bank (CIB) all reported profits during the first half of 2013.