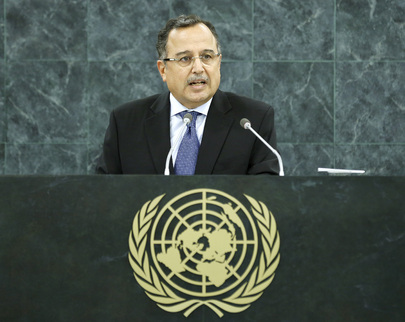 In his address to the United Nations General Assembly (UNGA) Nabil Fahmy announced that Egypt’s transitional phase will end by Spring 2014.The interim Minister of Foreign Affairs, who addressed the UNGA on Saturday, stressed that the mass protests against former President Mohamed Morsi on 30 June “showed the world that the will of the people cannot be broken… that it can grant authority, just as it can remove it from the hands of those who can abuse it.”

In his 15 minute speech to the 68th session of the UNGA, Fahmy said: “The Egyptians have an ambitious vision for the future that can be achieved through systematic work in a reasonable time frame.” He stressed that this vision is for an all inclusive society, “where the equal rights and duties of all citizens are ensured by the rule of law and equality before justice.”

Fahmy pointed out that the roadmap put forward by the Armed Forces following Morsi’s ouster in July is “underway” and “has so far succeeded in establishing the principles of justice, freedom and democracy, as a basis for governance.” He pointed out that the roadmap includes parliamentary elections and then presidential elections, which will complete the transitional phase by spring of next year.

The minister said that the determination to implement the roadmap “requires us to give utmost priority to the preservation of security and the enforcement of the law, and to counter any intimidation attempts at hindering our efforts.” He informed the assembly that Egypt has suffered from terrorist attacks, pointing out that such “hideous acts… aim at undermining the democratic process, and destroying our economy.” Fahmy said he expects the international community to “firmly stand by the Egyptian people in the fight against violence and its advocates.”

Fahmy also discussed Egypt’s foreign policy, which he now believes to be “a reflection of the will of our people, and is formulated in line with our interests and national security, with no regard to any other consideration.” The minister then outlined Egypt’s positions on key foreign policy issues, including the Syrian conflict, the Palestinian question, African issues, the structure of the UN and freeing the Middle East of weapons of mass destruction, for which he presented a three point plan.

The plan put forward by Fahmy calls on Middle Eastern countries and the five permanent-members of the Security Council to submit letters to the Secretary General of the UN expressing their support to rid the region of chemical, biological and nuclear weapons. The second step is to ensure that those countries in the region that have not yet signed or ratified international conventions on such weapons  do so by the end of the year. He called on Israel to sign the non-proliferation treaty and to ratify the Chemical Weapons Convention (CWC), and to sign and ratify the Biological Weapons Convention (BWC). He also called on Syria to ratify the BWC and to continue to take the steps it has agreed to under the CWC. Fahmy said that Egypt would also ratify the BWC as well as signing and ratifying the CWC, “provided that all countries of the Middle East complete accession measures to the international conventions.”

Fahmy also held a number of meetings in the margins of the UNGA, including with UN Secretary General Ban Ki Moon, President of the General Assembly John Ashe and his Bahraini and Lebanese counterparts.