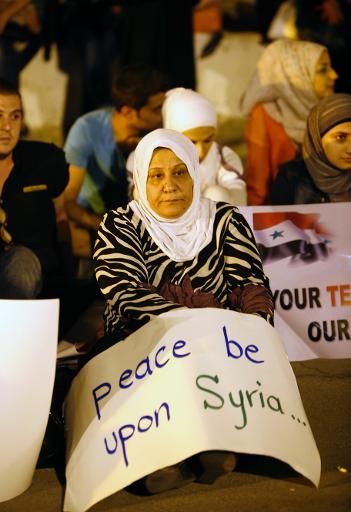 AFP – Human Rights Watch on Thursday accused the Syrian regime of detaining tens of thousands of people for protesting peacefully, torturing many or holding them for long periods.

“Behind the awful brutality of the fighting in Syria is the unseen abuse of political detainees [who are] arrested, tortured, and even killed for peacefully criticising the government or helping people in need,” said Joe Stork, Middle East and North Africa head for the New York-based watchdog.

“Arbitrary detention and torture have become business as usual for Syrian security forces,” he said in the report to launch a campaign called “Inside the Black Hole.”

Former detainees told HRW that methods such as electric shocks, rape and beatings were regularly used against political prisoners in Syria.

HRW said that this widespread use of torture in regime prisons was evidence of a clear government policy that could constitute crimes gainst humanity, urging Damascus to drop charges against activists facing trial in special courts.

While most of those taken into custody by security forces have been men, HRW said that women and children have also been arrested.

However, the report also said opposition groups fighting the regime of President Bashar al-Assad had arbitrarily detained activists, journalists and humanitarian workers, and in some cases executed them.

Stork called for the international community to work to free detainees held by all sides in Syria.

?Those with leverage with the government as well as with opposition forces should press for them to free everyone they are holding unlawfully,? he said.

Syria’s bloody conflict, in which nearly 115,000 people have died, began as a peaceful uprising in March 2011 before Assad’s security forces launched a deadly crackdown.

For years, human rights groups have documented the systematic use of torture in Syria’s jails.