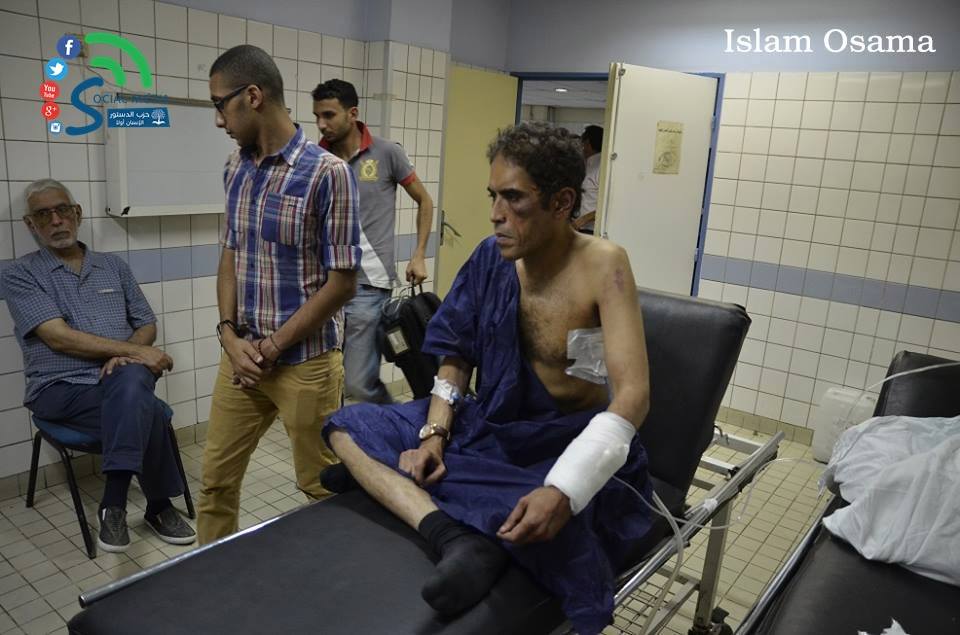 Dawoud was in his car driving in Qasr Al-Eini Street on Friday, passing by a pro-Morsi rally, when several pro-Morsi protesters identified him, chased him to Abu Al-Reesh bridge, forced him out of the car and physically attacked him, according to a statement by the Ministry of Interior.

The spokesman was stabbed in the chest and arm several times and his car was smashed, according to a statement by Al-Dostour Party. “He would have lost his life at the hands of those murderers if it weren’t for divine intervention,” the party added.

The Ministry of Interior stated that Dawoud sustained several wounds at his left chest, one penetrating wound, and cuts at his right arm. He was admitted at the New Al-Qasr Al-Eini Teaching Hospital.

Al-Dostour Party reported that one of the assailants was captured by residents of the area and turned over to the police. The ministry stated it arrested one of the alleged assailants, adding that he was arrested while in possession of posters supporting the Muslim Brotherhood. It said both Dawoud and a witness to the attack identified the captured man as one of the assailants.

Al-Dostour Party strongly condemned the attack on its spokesman, describing it as “criminal”. It called on the authorities to provide political parties and public figures with the necessary protection.

The party also called on all its members to commit to peacefulness and civility during the celebrations of the October War, scheduled for Sunday.

Mohamed ElBaradei, Al-Dostour Party founder and former vice president for international relations, also condemned the attack on Dawoud. In a personal tweet posted on Friday, ElBaradei stated that the attack on Dawoud, whom he described as “having a national conscience and moral courage”, reflects the size of the tragedy Egypt is currently witnessing.

The Freedom and Justice Party (FJP), the Muslim Brotherhood’s political wing, condemned Dawoud’s attack on Friday. The party stressed its opposition to any acts of violence, “even if they are committed against those who supported the military coup”, in a statement on Friday, in reference to the ouster of Morsi on 3 July.

The Salafi Al-Nour Party also condemned what it described as “savage” attack on Dawoud. The party spokesman Sherif Taha said in a statement released on Friday that such “criminal acts” put the state in a dangerous position, warning of the dangers of attacking politicians regardless of their affiliations. He rejected the idea of using violence in settling political scores.

The Misr Al-Qawia Party, founded by former presidential candidate Abdel Moneim Abul Fotouh, reflected similar rhetoric in a statement released on Friday. The party’s spokesman Ahmed Imam describe the attack as an “act of thuggery”, stressing that it is the authorities’ job to preserve the citizens’ security instead of “only focusing on political security”.

“Respecting all regardless of their opinions is crucial,” the party said in its statement. “We must steer clear of the intellectual terrorism which is currently being practiced.”

Dawoud resigned from his post as NSF spokesman on 16 August in objection to the support of several front parties to the security crackdown on pro-Morsi protesters. The resignation followed the forcible dispersal of the pro-Morsi  Rabaa Al-Adaweya and Al-Nahda sit-ins on 14 August.