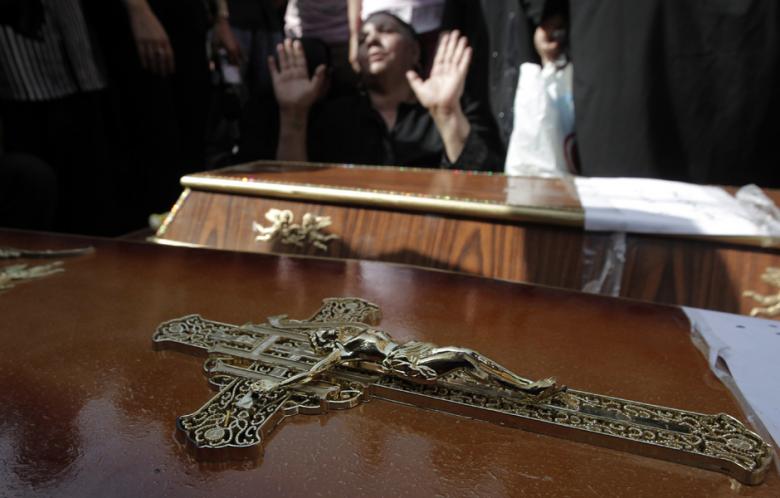 Political groups are calling for retribution for those killed during the armed forces’ deadly attack on protesters, dubbed by the media as the Maspero Massacre, the second anniversary of which is approaching on Wednesday.

Twenty-seven Coptic protesters were killed by the armed forces as they marched to the headquarters of the Egyptian Radio and Television Union, known as the Maspero building on 9 October 2011, in response to the burning of a church in Aswan.

A number of political movements released a joint statement on Saturday calling for the original demands of the massacre victims, including those of the 25 January Revolution. The movements called for a new constitution which secures transitional justice and bans military trials for civilians or in any cases which involve civilians, such as the Maspero massacre case. They also called for laws which grant citizens freedom of religion and criminalise discrimination and incitement, as well as issuing a single law to govern building new houses of worship for different religions. The movements further demanded accountability for those responsible for the death of the victims.

“Two years have passed since the Maspero massacre and still nobody had been held accountable or punished,” the statement read. It added that though “simple army soldiers carrying out [their leaders’] orders” were tried, none of those who incited the violence or justified it were held accountable.

“The former regimes of [ousted president Hosni] Mubarak and the Muslim Brotherhood consistently used Christians in Egypt as scapegoats,” the statement read.

The movements stated that sectarian attacks against Christians increased during the rule of the Supreme Council of the Armed Forces (SCAF), involving collusion between movements of political Islam and security apparatuses. Such attacks peaked when the SCAF, led by Field Marshal Hussein Tantawi, committed its first “grand massacre” in complicity with and relying on the incitement of Islamist movements, the statement added.

The movements said that the Muslim Brotherhood and their president Mohamed Morsi’s rule witnessed “outright incitement against all those from different religions [other than Sunni Islam]”, including Christians and Shi’as. The attacks intensified, the statement read, after “the people’s revolution against them”, which led to Morsi’s ouster. The movements accused Islamist movements of waging a campaign of vengeance against Christians amid security forces’ lax reaction.

The statement’s signatories included the Egyptian Social Democratic Party (ESDP), the Social Popular Alliance Party (SPAP), the 6 April (Democratic Front) movement and the Revolutionary Socialists. They called for a silent protest in front of the Maspero building on Wednesday in commemoration of the massacre’s second anniversary.

Maspero Youth Union announced it will visit the victims’ graves Wednesday morning in the suburban neighbourhood of 6 October then hold a memorial prayer at Saint Samaan’s monastery in Moqattam in the evening. The union said it will not hold a memorial march due to security concerns.

The union of Maspero victims’ families announced in a statement on Sunday that they will postpone the memorial, scheduled to be held in the Angel Church in 6 October neighbourhood, to Friday in order to avoid Maspero Youth Union’s ceremony.

The Maspero massacre occurred two years ago after army troops opened fire on a peaceful march from the Shubra district of Cairo to the Maspero building and used military vehicles to disperse it. The protesters were mainly Coptic Christians, although others joined in solidarity.