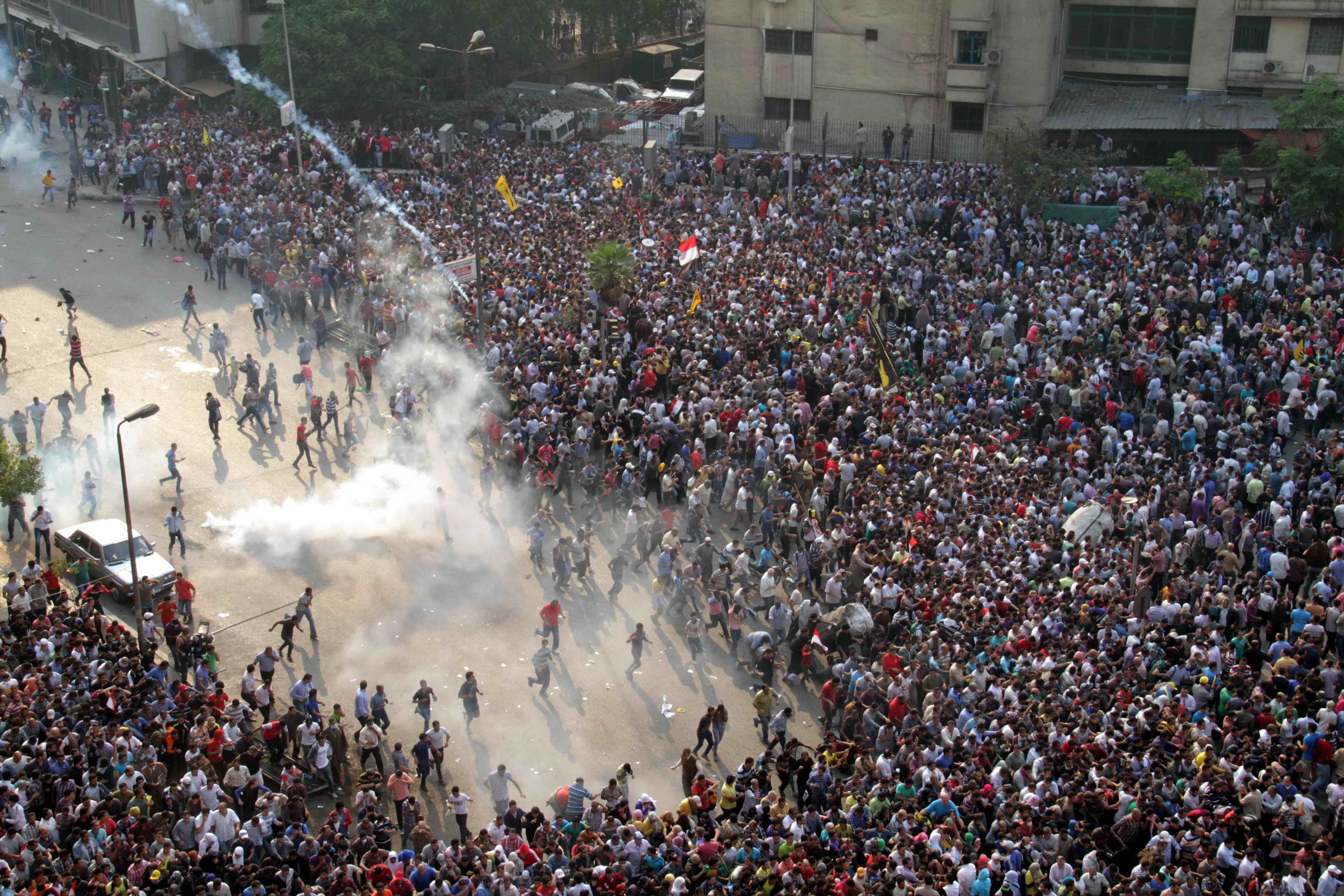 Clashes erupted throughout the capital on Sunday afternoon between police and protesters amid heightened security and calls for rival demonstrations on 6 October. At the time of writing, the Ministry of Health had reported 28 killed and 94 injured in the violence, with 300 Muslim Brotherhood supporters arrested, according to the security director.

Giza’s Dokki neighbourhood witnessed some of the most intense violence, primarily around Mosadaq Street and Dokki Bridge, where dozens were injured and police arrested some protesters.

Police fired tear gas, birdshot, and live ammunition at protesters, who set up barricades and responded by throwing rocks.

Security forces and area residents had positioned themselves atop Dokki Bridge and along Al-Tahrir Street, while Pro-Morsi protesters amassed near Assad Ibn Al-Furat Mosque on the same street.

Anti-coup protestors set fire to tires to decrease the effect of teargas fired by security forces, who also fired birdshot and live ammunition at the Anti-Coup demonstrators.

Area residents, for the most part, appeared to side with security forces, using Molotov cocktails and brandishing bladed weapons. According to an armed area resident, their participation was meant as revenge for the death of Kerdasa police station deputy warden, Amer Abdel Maksood, who had lived in the area.

The Pro-Morsi march started from Al-Istikama Mosque in Giza, with its destination being Tahrir Square. The march was intercepted and attacked by security forces and area residents in Al-Tahrir Street in Dokki.

“Today is the beginning of the end of the coup,” said Abdel Rahman, a young protester who said his only demand was the return of Morsi. “The Interior [Ministry] is trying to scare us but they are unable to,” he added.

Across the river, meanwhile, downtown also saw clashes in the vicinity of Ramses Square and on the Nile Corniche.

Anti-Coup marchers clashed with security forces as they attempted to reach Tahrir Square in the afternoon. Ramses Street and the surrounding area was littered with rocks, broken glass, torn-up posters of Morsi and commemorative Rabaa Al-Adaweya signs.

Several army vehicles had managed to contain the Pro-Morsi marchers at the corner of Emad El-Din Street and Ramses Street. Pro-army demonstrators threw rocks at the marchers, prompting the army to fire in the air to disperse them. The army allowed the Pro-Morsi protesters to move further away from Tahrir Square. As the rock-throwing intensified, a volley of tear-gas was fired from the 6 October Bridge down onto Ramses Street, dispersing the rock-throwers.

The Anti-Coup Alliance, a group backed by groups including the Muslim Brotherhood that support the return of ousted President Mohamed Morsi, had called for marches and demonstrations in Cairo and had announced they planned on marching to Tahrir Square, where supporters of the army and Minister of Defence Abdel Fattah Al-Sisi had gathered in commemoration of the 40th anniversary of the October War.

Over a thousand gathered in the square under heavy security measures enforced by the police around the square, shielding it from the surrounding clashes. The square was closed off to traffic, with all entrants filtered in through metal detectors and subjected to bag searches. One policeman said that the heightened security measures were necessary to protect civilians.

Many in the square were chanting in support of interim Minister of Defence Abdel Fatah Al-Sisi, with some parents having clothed their children in military outfits for the occasion. “All the people here want Al-Sisi to be president,” said Karim El-Masry, who was present at the rally, adding that there is no choice between Morsi and Al-Sisi.

One man in the square, who wanted to be named only as Mohamed, claimed he was a Pro-Morsi protestor and would like to see him be reinstated as president. He spoke quietly in fear that others in the square would hear him. “I came to see how the military treat other Egyptians,” he said. “We want democracy; guns and tanks on the streets is not democracy.”