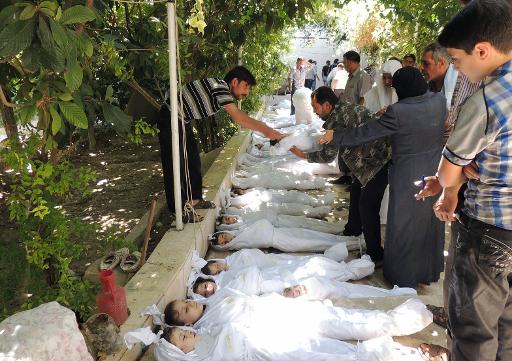 AFP – Experts began overseeing the destruction of Syria’s chemical weapons on Sunday under the terms of a UN resolution that will see Damascus relinquish the banned arms, an official told AFP.

The source in the international mission said experts had begun verifying details turned over by the Syrian government about the arsenal and destroying weapons and production facilities.

The team faces the daunting task of disposing of an estimated 1,000 tonnes of the nerve agent sarin, mustard gas and other banned arms at dozens of sites in Syria by mid-2014.

As the operation got under way, President Bashar al-Assad admitted in an interview with Germany’s Spiegel news magazine that his government had made “mistakes” in the country’s brutal conflict.

But he again denied that his forces used chemical weapons in a 21 August attack that led to threats of a US strike and eventually the UN resolution requiring Syria to turn over its arsenal.

In Damascus, meanwhile, a barrage of mortar rounds slammed into a Christian neighbourhood, killing eight people.

And UN-Arab League envoy Lakhdar Brahimi called on Assad’s regime and the rebels to hold peace talks “without preconditions”.

The team of disarmament experts from the United Nations and the Organisation for the Prohibition of Chemical Weapons (OPCW) based in The Hague arrived in Damascus on Tuesday.

An official in the joint mission said Sunday that members of the team “have left for a site where they are beginning verification and destruction.”

“Today is the first day of destruction, in which heavy vehicles are going to run over and thus destroy missile warheads, aerial chemical bombs and mobile and static mixing and filling units,” he said.

“The physical process of the destruction and dismantling of the weapons and the production facilities is carried out by the Syrians under the supervision of our team, which will then verify and confirm the process has been carried out appropriately,” he added.

The OPCW has said other methods to render Syria’s production facilities unusable could include explosives, sledgehammers, or pouring concrete.

Syria agreed to give up its chemical arsenal under a UN resolution that enshrined a US-Russian agreement aimed at averting US military action.

The deal was hammered out in the wake of the 21 August attack, which killed hundreds of civilians on the outskirts of Damascus and which the United States blamed on Assad’s government.

In the interview published Sunday by the weekly Spiegel news magazine, Assad said his government was being “very transparent” with the UN-OPCW team.

“The experts can go to every site. They are going to get all the data from us, they will verify them, and then they can make a judgement about our credibility,” he said.

He repeated that his government was not responsible for the August chemical attack but acknowledged that mistakes had been made in responding to the uprising that began in March 2011.

The uprising initially took the form of peaceful protests against the Assad family’s 40-year reign but escalated into a civil war after government forces fired on demonstrators.

“Whenever political decisions are made, mistakes happen,” Assad said.

“Personal mistakes by individuals happened. We all make mistakes. Even a president makes mistakes,” he added. He insisted, however, that “our fundamental decisions were right.”

Asked if the opposition has sole responsibility for massacres, and if his forces were all innocent, Assad said “reality is not black and white.”

“You can’t just absolutely say ‘they carry 100 percent of the blame and we carry zero’,” he said.

“But basically, it’s correct that we are defending ourselves.”

The magazine also reported on Sunday that German intelligence services believe Iran has allowed Assad’s regime to station fighter jets on its territory to protect them from foreign attack.

More than 115,000 people have been killed since the beginning of the conflict in Syria, according to the Syrian Observatory for Human Rights, a monitoring group.

Two million people have become refugees and millions more have been displaced inside Syria.

On Sunday afternoon, Syrian state news agency SANA said eight people were killed and 27 injured in the Damascus district of Qassaa when four mortar rounds slammed into the Christian neighbourhood.

Rebel fighters regularly fire into Damascus from rear bases in neighbourhoods around the capital.

As the fighting continued, UN-Arab League peace envoy Brahimi told France’s TV5 Monde that he hoped the two sides would agree to attend a peace conference in Geneva in mid-November “without preconditions.”

“We are going to Geneva without preconditions. Mr. Bashar al-Assad cannot say that he does not want to negotiate with ‘X’ or ‘Y’ and it’s the same thing for the opposition,” Brahimi said.