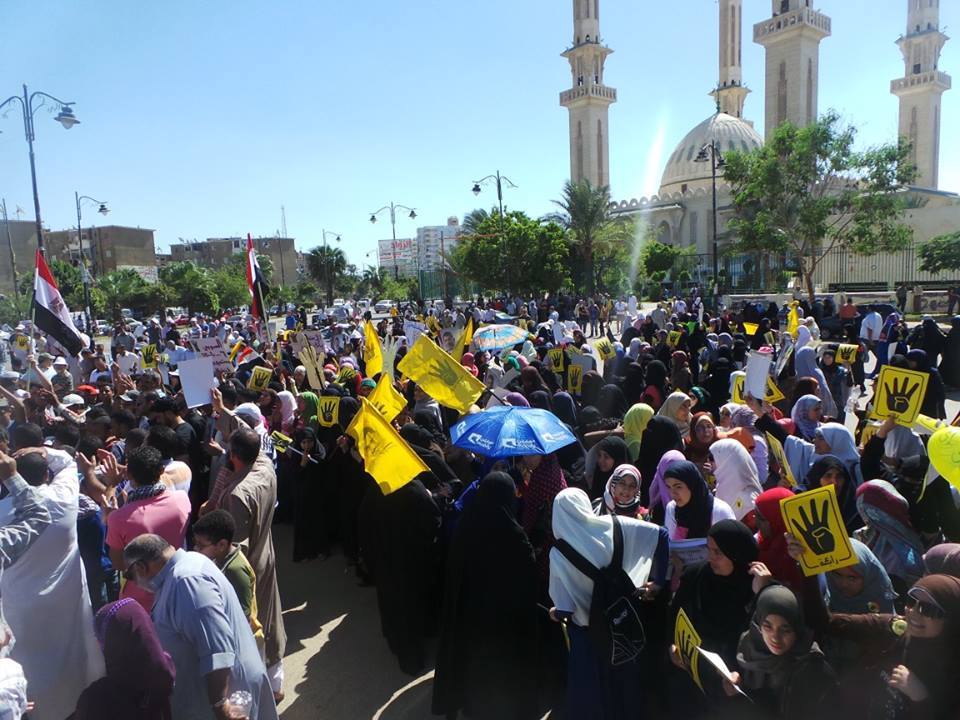 Clashes between security forces and a pro-Morsi protest in Delga, Minya on Sunday leaves one dead, according to the Minya Security Directorate PR office.

Minister of Interior (MOI) spokesman Hany Abdel Latif told Daily News Egypt that nearly 1,000 pro-Morsi protesters besieged Delga Police Station, and began throwing rocks and firing birdshots in an attempt to break in the police station. “In legitimate self-defense, the police forces fired bullets and tear gas to disperse the protest; one protester was dead,” The MOI spokesman added. Abdel Latif did not confirm the reason behind the protester’s death.

At 5pm, MOI spokesman stated that security forces controlled the situation in Delga, after one was reported dead and tens injured.

In Suez, violent clashes were seen in the Masjid Al-Arba’in neighbourhood along Al-Geish road, when hundreds of “anti-coup” protesters began marching towards Al-Arba’in square. The square was filled with local residents, along with the army and police forces, who were celebrating the 40th anniversary of 6 October.

Protesters held signs denouncing defence minister Abdel Fatah Al-Sisi, while chanting “the army and police are a dirty hand”. They were blocked from entering the square by local residents when clashes erupted between the two sides; rocks, empty soda bottles and Molotov cocktails were thrown and birdshots were fired. Several vendors were injured as a result.

Army and police forces fired tear gas to break up the clashes, while supporters of former President Morsi set fire to rubber tires.

Anti-coup protesters performed afternoon prayers in the middle of Al-Geish Street amid the clashes. Injuries were reported on both sides.

Aswat Masriya reported that three people were injured in Suez violence, one with a live bullet.

The Anti-Coup alliance called for protests on Sunday, the 40th anniversary of 6 October 1973, against what they described as “the military coup of 3 July”.

MOI announced in a press release on Saturday that it will “confront any law-breaking practices strictly” and that “Police forces are committed to facing any attempts of stirring strife during the celebrations of 6 October.”