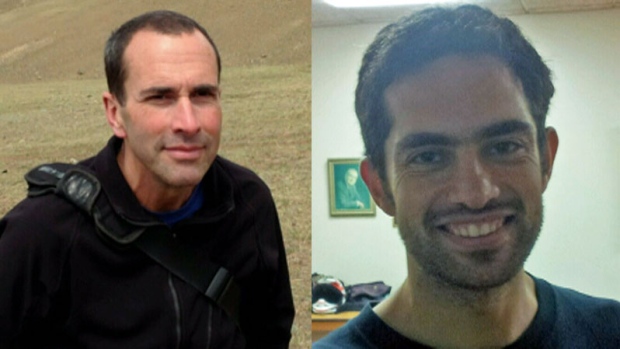 Two Canadian citizens who were released from prison on Saturday were not able to board a flight leaving Egypt as the case against them is still open.

Tarek Loubani and John Greyson were arrested on 16 August following violent clashes between security forces and demonstrators in Ramses Square in central Cairo. The Canadian nationals, who witnessed the violence, claim they were heading back to their hotel when they stopped to ask police for directions and were then arrested.

Spokeswoman for the Canadian embassy in Cairo confirmed that the pair went to the airport in an attempt to board a flight but were turned away. She was unable to provide further information regarding their whereabouts inside Egypt or details relating to their case.

Adam El Shalakany, an associate at the Shalakany Law Office that is handling the case, said that the Canadian’s lawyer, Marwa Farouk filed an application with the Prosecutor General on Monday to lift the travel ban.  El Shalakany said they are still unsure about the conditions of Loubani and Greyson’s release because the relevant authorities were unavailable due to the public holiday on Sunday. He added that the result of the appeal would depend on the conditions of their release and more information would be available on Tuesday.

A judicial source said the investigation is a judicial process and is being handled by the Prosecutor General’s office.

The Canadian government, as well as friends and relatives of Loubani and Greyson welcomed the decision to release them. Midway through their stint in jail the doctor and filmmaker began a hunger strike in protest of what Greyson’s sister described as “an arbitrary process that lacks any credibility.” They ended their hunger strike days before their release having received an increased exercise allowance.

A letter from Loubani and Greyson detailing the circumstances of their arrest and the conditions inside the prison was published on a campaign website. In the letter the pair said: “We were: arrested, searched, caged, questioned, interrogated, videotaped with a ‘Syrian terrorist’, slapped, beaten, ridiculed, hot-boxed, refused phone calls, stripped, shaved bald, accused of being foreign mercenaries.”

The Ministry of Foreign Affairs denied that Loubani and Greyson had been mistreated in prison and asserted that they had not been imprisoned under the current emergency law, but the standard Egyptian penal code. The ministry also claimed that the Canadians had been formally charged, however only the prosecution can announce formal charges.

Friends and relatives had expected the two men to return to Canada on Sunday. Loubani’s friend and colleague Justin Podur posted on Twitter on Sunday: “They are awaiting passports and when they get them we will get them booked on a flight home.”

Loubani and Greyson were en route to Gaza where Greyson intended to make a short film of Loubani working with local doctors. Egypt’s authorities had closed the border crossing into Gaza at the time, preventing the pair from continuing their travels.