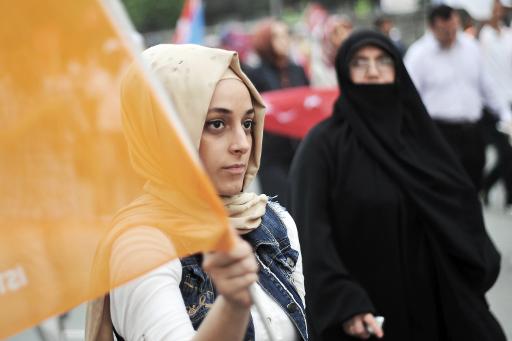 AFP – Turkey on Tuesday lifted a decades-old ban on Islamic headscarves in the civil service as part of wide-ranging reforms driven by the Islamic-rooted government.

The measure hailed by Prime Minister Recep Tayyip Erdogan, whose wife wears a headscarf, as a “step toward normalisation” came into effect after it was published in the Official Gazette.

“We have now abolished an archaic provision which was against the spirit of the republic. It’s a step toward normalisation,” Erdogan said in a parliamentary speech to his ruling party lawmakers.

“A dark time eventually comes to an end,” he said. “Headscarf-wearing women are full members of the republic, as well as those who do not wear it.”

Female civil servants are now allowed to wear the veil while their male counterparts can sport beards, both symbols of Muslim piety which were banned by Turkey’s first president Mustafa Kemal Ataturk.

However, the ban remains in place for judges, prosecutors, police and military personnel.

Last week, Erdogan, who has been under fire for what critics say are creeping efforts to Islamicise the nation, unveiled a package of democratic reforms, using the opportunity to take on the highly controversial headscarf ban in the majority Muslim but staunchly secular nation.

Erdogan’s Justice and Development Party (AKP) has pledged to remove the ban on the wearing of headscarves in all areas since it came to power in 2002. It has already relaxed the ban at universities.

Turkey’s main opposition party however denounced the measure as a breach of the secular regime.