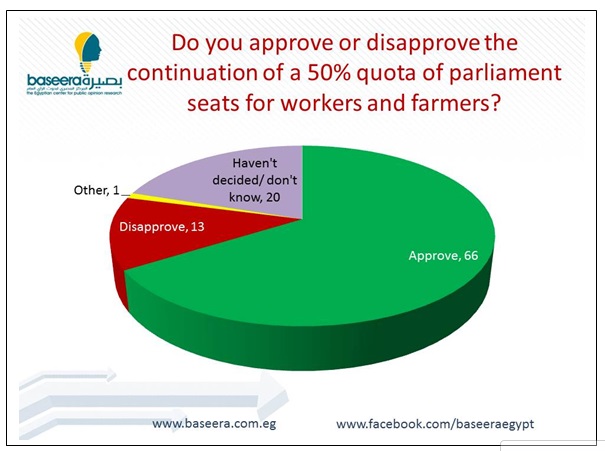 The Egyptian centre for Public Opinion research (Baseera) conducted a poll on the extent of Egyptians’ approval of the formation of the 50-member constitutional committee, and on the issues they deem most necessary for inclusion in the constitution, as well as their opinion on some of the constitution articles.

Respondents were asked what issues they deemed necessary and important for inclusion in the new constitution, with security and stability coming at the top of the list at 28%, followed by justice and equality at 14%, improving living conditions in the country at 12%, provision of employment opportunities at 11%, followed by the reduction of prices (7%), improving education (7%), the upholding of human rights (6%) guarantee of liberties (6%) health and the provision of healthcare (4%)  and 23% replying that they did not know.

The poll also included a question on the continuation of a 50% quota on parliament seats for workers and farmers, with results indicating that 66% of Egyptians approve its continuation, while 13% disapprove, 20% didn’t decide and 1% replied in favour of conditions being put in place for its continuation. Worthy of note is the fact that the percentage of those who approve does not vary between urban and rural areas, and that there is no clear differences among urban governorates, Lower Egypt and Upper Egypt. Likewise, there are no significant differences in terms of approval among Egyptians with various levels of education. The percentage of those who disapprove, however, climbs from 7% among those with less than intermediate education to 28% among those with university education, with the difference being in the lower percentage of respondents who could not decide.

The poll was conducted using landline and mobile telephones on a sample size of 1,724, ages 18 or older nationwide. All interviews were conducted on 25 and 26 September 2013. The response rate was approximately 75%, while the results’ margin of error is less than 3%.