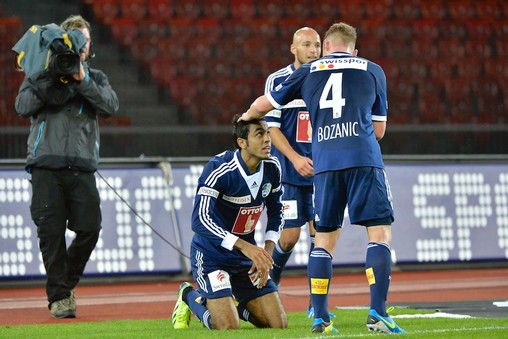 In his first full match off the bench Mahmoud Abdel Moneim “Kahraba” scored his debut goal for Luzern in the 39th minute of a hard-fought match against Zurich on Saturday. The 19-year-old was also named man of the match. Luzern are fifth in the Swiss Super league with 15 points after ten games. Kahraba is now on the squad shortlist for Egypt’s playoff against Ghana on 15 October.

In form, Mohamed Salah played a huge role in Basel’s Sunday win against Laussane, where he helped contribute Basel’s first goal. A commanding shot with his dominant left foot passed the keeper only to bounce off the post and once more on the keeper into the goal. The goal was considered an own goal, however, and Salah’s name was not put on the score sheet. Teammate and compatriot Mohamed Al-Neny meanwhile recovered from a shoulder injury to play in Laussane match.

Hull City right winger Ahmed Al-Mohammady started in the team’s game against Aston Villa in the English Premier League, playing the position for the second game running. Mohammady was substituted out with five minutes left in the 0-0 draw. Although expected to start, Mohamed Nagi Gedo has yet to debut for this seasons Tigers campaign.

Young Ali Ghazal assisted his team in a 3-0 win after playing the full match against Sporting Braga. This is his fourth 90-minute game.

Veteran midfielder Hossam Ghaly helped Lierse in their second successive win against Mons on Sunday. Ghaly recorded an assist after a through ball to Watt, who converted the pass into a first-touch goal.