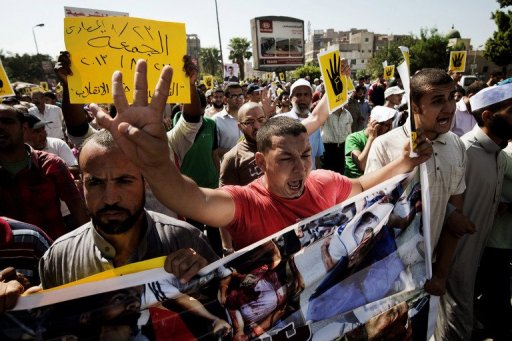 The cabinet approved in its Thursday meeting a new law to organise the right to hold meetings, non-political parades and political protests, state-owned Al-Ahram reported.

The law, commonly known as the Protest Law and consisting of 21 articles, was presented by Minister of Justice Adel Abdel Hamid to the cabinet.

The law states that citizens have the right to organise and join meetings, parades and demonstrations under certain conditions. The law defined parades as demonstrations with non-political goals.

The law bans using places of worship as gathering points for protests, and demonstrators are also banned from possessing weapons, ammunition, fireworks and face-covering masks.

To organise a protest, organisers should request permission from the police station responsible for the intended site of protest 24 hours in advance. Such permission should include the location and the pathway of the protest, start and end time, the issue which the protest is concerned with, its demands and the names of the organisers of the protest.

The law obliges the Minister of Interior to address the authorities concerned with the demands of the protest to try to find solutions.

The ninth article in the law forbids sit-ins, sleeping over at the location of the protest, road blocking or negatively affecting the life of other citizens, including “obstructing their interests” or endangerment.

The law obliges security forces to protect protests, unless in the case of illegal activity, when security forces “in uniform” should disperse the protest. The law bans the use of any force besides water hoses, teargas and sticks.

Security forces can use further force if they are in a position of self-defence, according to the law.

According to the new law, governors in each governorate should decide a “buffer zone” of 50 to 100 metres between the protests and presidential headquarters, legislative entities, governmental entities, judicial entities, foreign missions and embassies, police stations and archaeological sites. Demonstrators are banned from entry to these places to sit-in or set platforms.

The law has stirred mixed reactions among political groups.

Al Tayar Al-Sha’aby spokesman Emad Hamdy said that they reject the law, calling it “inappropriate” to ban the right to sit-ins.

Prominent Human Rights lawyer Gamal Eid denounced the law, calling it a “continuation of the [former president Hosni] Mubarak regime’s practices.” The only difference, Eid said, is that the public opinion welcomes such practices since they are directed against the Muslim Brotherhood.

Eid added that this law is a new episode in a series of “laws with bad reputations” issued by the Minister of Justice, and would not stop people from demanding their rights.

“Its issuance was not a surprise, because Abdel Hamid and the current authority do not relate to the revolution whatsoever,” he said.

Eid added that there would be legal appeals against the law, “but the most important thing is movement on the ground, which transforms the law into wasted ink on paper.”

Prominent National Salvation Front figure Wahid Abdel Meguid said that the front had not formed an opinion nor discussed the law yet.

The Tamarod (Rebellion) campaign was not available to comment.

The law is expected to stir a wide range of reactions over the course of the next days.