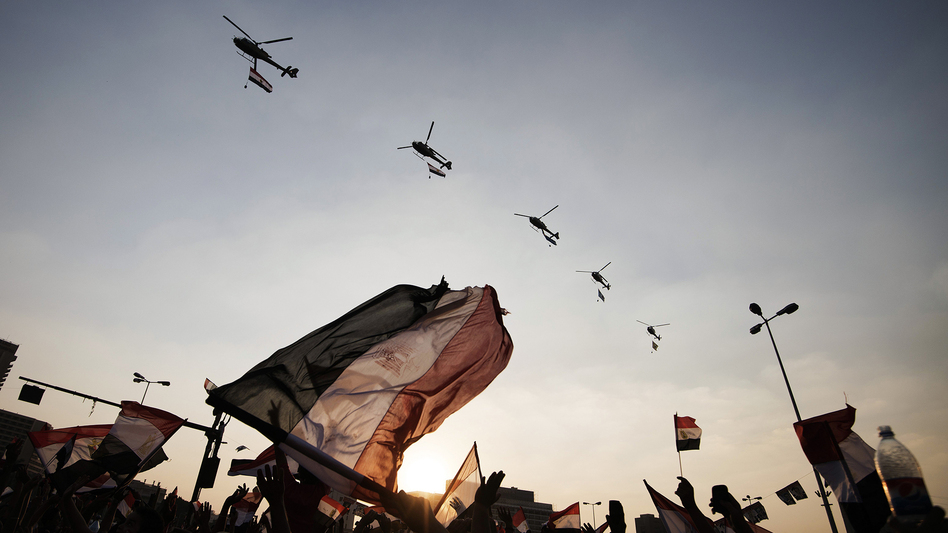 Egypt celebrated National Air-Force Day with a display of its F-16 fighter jets flying low over Cairo early on Saturday trailing plumes of red, white and black smoke. The jets were followed by a display of Egypt’s fleet of Apache helicopters and a variety of other aircraft throughout the day.

The jets and helicopters, which have been provided through United States military funding, will be affected by Washington’s decision to “recalibrate” its aid to Egypt.

Marie Harf, deputy spokesperson for the US State Department stressed once again on Friday, the importance for Egypt and the US “to continue working together.” She added that she was unaware of any phone call between Secretary of State John Kerry and Egyptian officials on the issue.

Interim Minister of Defence Abdel Fatah Al-Sisi has taken a defiant approach to his response to the cutting of military assistance. Speaking to Al-Hayat media outlet he stressed that Egypt is greater than threats to cut aid from any country.

Egypt criticised the decision, which was officially announced on Wednesday following days of speculation. Following the ouster of former President Mohamed Morsi in July, US President Barack Obama ordered a review of the US aid package to Egypt, which totalled at around $1.3 billion annually. The cuts, according to the state department, will not affect funding that “directly benefits” Egyptians in areas of health, education and private sector development. However the delivery of F-16 jets, M1A1 tank kits, Harpoon missiles and Apache helicopters will be temporarily halted.

Egypt’s new ambassador to China met with Chinese President Xi Jinping, according to state news agency MENA. Xi expressed his desire to continue developing the relationship between Egypt and China. Ambassador Magdy Amer told MENA that the relationship is “strong and growing.”

On a recent visit to Moscow, following talks with his Russian counterpart Sergei Lavrov, Fahmy said of Egypt’s foreign policy, “we are heading into many external circles and will develop relations that need assessing.” He added that this applied to both old and new relations. Fahmy denied that Egypt was moving away from the West and the two ministers stressed the importance of the relationship between their two countries.

During the same visit Fahmy met with Russia’s top security official to discuss current development in the Middle East. The Egyptian minister acknowledged that it was not standard procedure for a foreign minister to meet with a security chief, attributing the meeting to Russia’s desire to develop relations beyond that of meetings between foreign ministers.

Interim President Adly Mansour recently returned from his first overseas trip to Saudi Arabia and Jordan, where he was received to a fanfare of military displays. The heads of state in both Saudi Arabia and Jordan pledged their support for Egypt’s transition. Mansour discussed financial aid in Saudi Arabia, which pledged $5bn to Egypt following Morsi’s ouster.