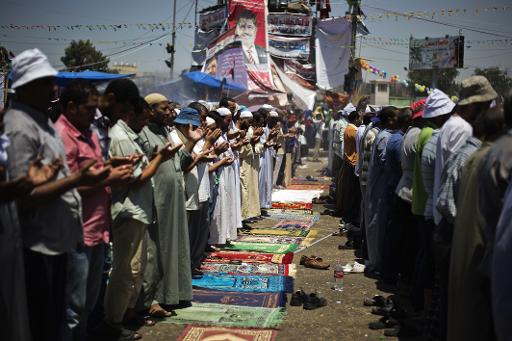 Elsewhere in Cairo, Security forces closed off access to iconic Tahrir Square, symbol of the 2011 uprising against former strongman Hosni Mubarak, as well as Rabaa al-Adawiya and Al-Nahda squares — the sites of a deadly crackdown on supporters of ousted president Mohamed Morsi on August 14.

Witnesses and security officials said worshippers also stayed away from the capital’s Mustafa Mahmud square — one of the biggest squares where Egyptians traditionally gather on Eid, a major public holiday, as devotees mark the prophet Ibrahim’s willingness to sacrifice his son when God ordered him to.

This year people chose to pray in and outside a mosque close to the square instead.

Security officials told AFP that the dawn prayers passed without incident and there had been no reports of Islamists or members of the banned Muslim Brotherhood holding marches in the country.

Most prayers were held in areas designated by the religious endowment ministry, a security official said.

In the Mediterranean city of Alexandria prayers at the Al-Qaid Ibrahim mosque, the scene of clashes between pro- and anti-Morsi groups, also went ahead peacefully, a security official said.

The Anti-Coup Alliance, led by Morsi’s Muslim Brotherhood, had urged its supporters to pray in all the squares and streets of Egypt on Tuesday.

But on Monday state news agency MENA quoted an unnamed security official as saying that the interior ministry would “confront any attempt to disturb Eid celebrations”.

On October 6, crowds of Morsi loyalists had tried to reach Cairo’s Tahrir Square where supporters of the army were celebrating the 40th anniversary of the Arab-Israeli war.

But security forces stopped the ousted president’s backers from reaching the square, and 48 people were killed in the clashes that followed. London-based watchdog Amnesty International says 49 died in the violence.

Morsi’s Islamist supporters have regularly tried to hold demonstrations against the military, but their ability to stage mass protests waned after a crackdown by security forces on August 14.

More than 1,000 people have been killed since August 14 in Cairo, while more than 2,000 people, mostly Islamists, have been detained.

Morsi has been held at a secret location since his ouster by the army on July 3.