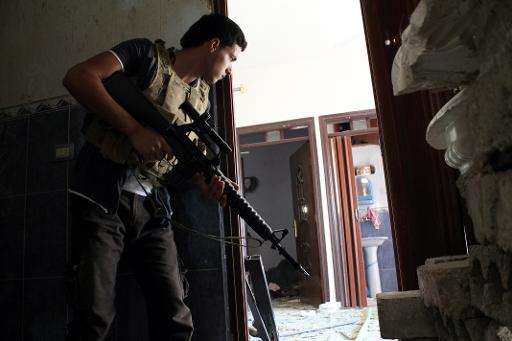 Beirut (AFP) – Syria’s opposition National Coalition said Thursday it will attend a “Friends of Syria” meeting in London on 22 October that is expected to focus on proposed peace talks.

The key opposition grouping said it would also hold internal discussions in Istanbul next week, culminating with a vote on whether to attend the proposed November peace meeting in Geneva.

“We have received an official invitation… to participate in the meeting of the Friends of Syria on October 22,” Coalition member Monzer Aqbiq told AFP by phone.

He said the meeting in London would “focus on these countries’ understandings about Geneva 2 and what it should result in.”

He expected the Friends of Syria — grouping nations which support the opposition — to agree on outlines described by US Secretary of State John Kerry earlier this week.

The top US envoy said Syrian President Bashar al-Assad had lost legitimacy and that the country needed a “transition government … a new government entity.”

Kerry on Thursday also announced he would take part in the London talks.

The Syrian government has said it would attend proposed talks in Geneva, but insists that Assad’s departure from office will not be on the table.

As a result, participation in the mooted talks has divided the Syrian opposition, which insists the president cannot remain in power.

Aqbiq, who is also an advisor to Coalition president Ahmed Jarba, said the grouping would also next week discuss the formation of a government.

The Coalition’s political committee will meet on 22 and 23 October, followed by a meeting of its General Assembly on 24 and 25 October, he said.

“We will vote on the new government and the subject of Geneva during the General Assembly meeting,” he said.

The Syrian National Council, a key member of the Coalition, has already said it opposes the Geneva conference and threatened to quit the grouping if it takes part.

The international community has for months been pushing Syria’s rebels and the regime to participate in talks on a negotiated solution to the conflict, which has killed an estimated 115,000 people since March 2011.