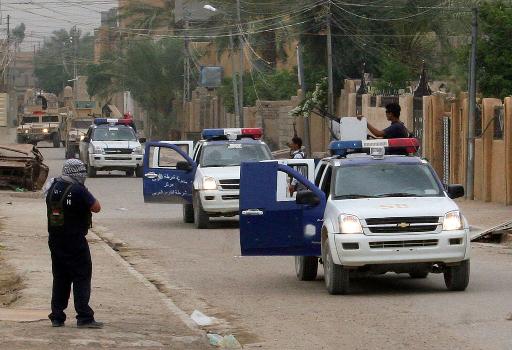 AFP- Militants attacked police and electricity headquarters in the Iraqi city of Fallujah on Monday, killing two police, in the second such attack in two days, officers and a doctor said.

Iraq is suffering its worst violence since 2008, when the country was just emerging from a brutal sectarian conflict, and authorities have so far failed to curb the surge in unrest.

The violence began with a suicide bomber detonating explosives at the entrance of the police headquarters in Fallujah, west of Baghdad, while a second struck the nearby electricity department headquarters, police said.

Militants then hit the police headquarters from three sides with gunfire, mortar rounds and rocket-propelled grenades, entered the electricity department building, and fired on police with sniper rifles.

The violence killed two police, including a major, and wounded four others, the officers and a doctor said.

The attack came a day after a coordinated assault by suicide bombers on government buildings in Rawa, a town north of Fallujah that is also in Anbar province.

Two suicide bombers on foot and another driving a vehicle rigged with explosives attacked the local police headquarters in Rawa, while another bomber in a vehicle struck an army checkpoint at the town’s entrance.

Another three bombers on foot and a fourth in a vehicle attacked the local administrative headquarters while officials were meeting inside.

The bombings killed at least eight people, including three members of the local council for the area and three police.

Militants, including those linked to Al-Qaeda, frequently target Iraqi security forces and other government employees.

With the latest attacks, more than 490 people have been killed so far this month, and more than 5,200 since the beginning of the year, according to AFP figures based on security and medical sources.

A study released this month by academics based in the United States, Canada andIraq said nearly half a million people have died from war-related causes in Iraq since the US-led invasion of 2003.