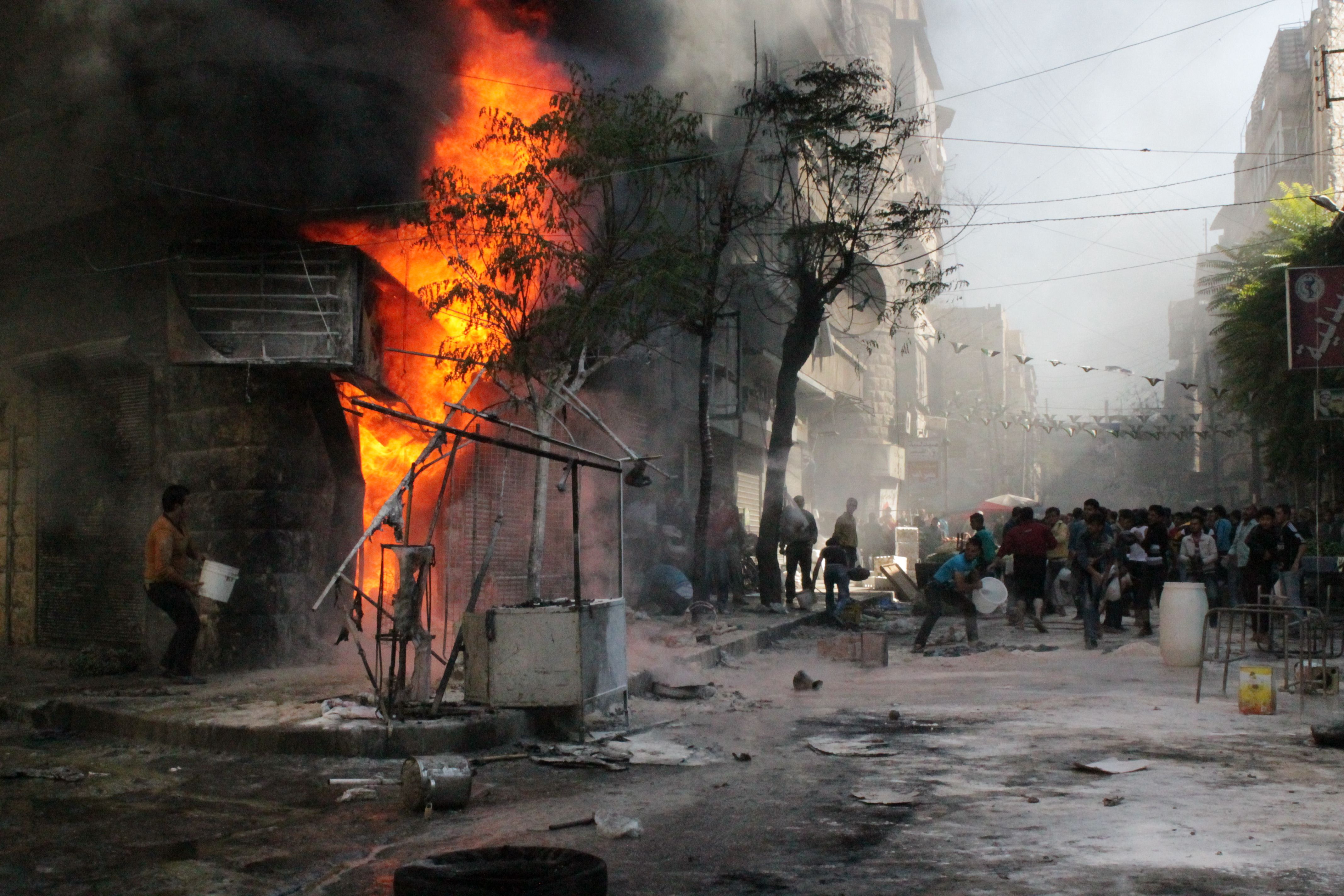 AFP- Western and Arab diplomats on Monday will to try to build support for proposed Syrian peace talks next month imperilled by rifts among the opposition, which may refuse to attend.

Government warplanes meanwhile launched strikes on areas southeast of Damascus on Monday after rebels seized key regime positions there, while troops pressed their onslaught on the besieged suburb of Moadamiyet al-Sham, a watchdog said.

US Secretary of State John Kerry was to meet Arab League representatives in Paris later on Monday ahead of a Tuesday meeting of the opposition and its Western and Arab backers.

UN-Arab League envoy Lakhdar Brahimi warned on Sunday that the Geneva 2 peace talks, aimed at creating a transitional government and ending nearly three years of fighting, cannot be held without the attendance of a “credible opposition” to President Bashar al-Assad.

“There is an agreement to attempt to hold Geneva 2 in November, but the date has not been officially set,” Brahimi said Sunday after meeting the head of the Arab League in Cairo.

“We hope it will take place in November.”

Brahimi spoke on the first leg of a Middle East tour aimed at drumming up support for the initiative to end the 31-month conflict that has killed more than 115,000 people and displaced millions more.

The veteran trouble-shooter was in Iraq on Monday where according to a foreign ministry official he was holding talks with Prime Minister Nuri al-Maliki.

Brahimi has said he will also travel to Qatar, Turkey, Iran, Syria and then Geneva for talks with Russian and US representatives.

Al-Watan, a pro-government newspaper, said Brahimi would visit Syria next week, where he came under heavy criticism from the regime for suggesting a transitional government following his last visit in 2012.

Al-Watan said Damascus, which has accused Brahimi of tilting towards the rebels, was ready to welcome him as long as “he works as a mediator, not as a party in the international conflict over Syria”.

Washington and Moscow have been trying to organise the conference on the heels of a landmark deal they reached for Syria to destroy its chemical weapons by mid-2014.

But the opposition has been fiercely critical of the agreement — which averted US strikes on the regime following a sarin gas attack in August that killed hundreds of people — and at least one major faction, the Syrian National Council (SNC), has already refused to go to Geneva.

The opposition has also demanded that Assad step down as part of any agreement, while the regime has insisted his exit is not on the table.

The National Coalition umbrella opposition group, which includes the SNC, on Monday said it had postponed internal meetings to early November, as it weighs whether to attend the Geneva talks.

Originally set for this week, the group had aimed to discuss and reach a common position on the issue, but Tuesday’s conference in London of the Friends of Syria countries that support the rebellion prompted the postponement.

Even if the Coalition attends the Geneva meeting, it is unclear whether it can enforce any agreement, after dozens of rebel brigades have in recent weeks rejected the umbrella group.

The Geneva initiative was first announced last year, but it has been repeatedly postponed over opposition objections and a dispute over which countries, including Iran, should participate.

As diplomats wrangled over the proposed talks, government forces were attempting to blunt a rebel offensive around the town of Mleha, southeast of Damascus, the Syrian Observatory for Human Rights said.

“Warplanes carried out four air strikes this morning (Monday) on the edges of the town of Mleha,” near army positions the rebels captured at the weekend, the Britain-based monitor said.

At the same time, regime troops pressed their onslaught on the besieged town of Moadamiyet al-Sham southwest of the capital, with fierce clashes between government and rebel troops on the outskirts of the town, the Observatory said.

Moadamiyet al-Sham has been besieged by regime forces for months, with thousands of civilians trapped inside and running desperately low on food and medicine, according to UN officials and residents.

Thirty-one months into Syria’s conflict, the army is pushing hard to secure Damascus by trying to crush rebel-held pockets on its outskirts.