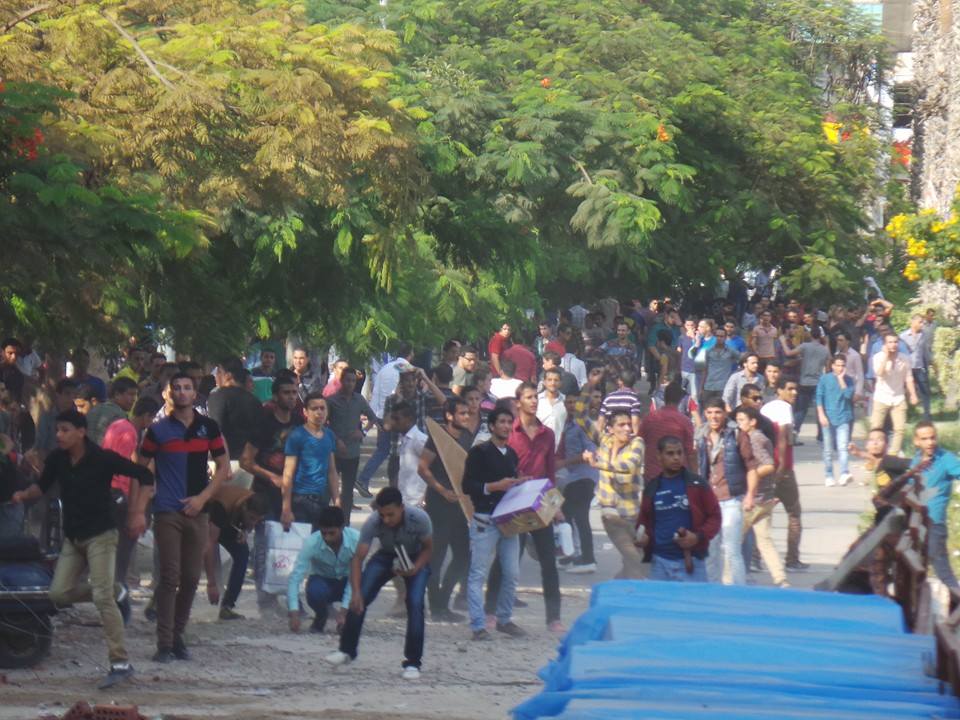 Clashes erupted between Students Against the Coup and opposing students in Mansoura University on Tuesday afternoon.

Local Students Against the Coup member Ahmed Raga’i, said the group had organised a march of between 2,500 and 3,000 students against what he called “the military coup of 3 July.”

According to Raga’i, the march was met by a group of students who chanted in support of Defence Minister Abdel Fatah Al-Sisi, prompting his march to shift directions. Raga’i claimed that the opposing students were then supplied with “thugs” and attacked the march, which led to a melee and exchange of rock-throwing.

Raga’i said birdshot, fireworks and various melee weapons were all used to attack the march. “There are many injuries among the anti-coup students, [but] I don’t think any students from the other side were injured as they were the ones armed.” Raga’i did not specify a number of injured and denied the arrest of any students.

The anti-coup student said that Central Security Forces broke into university campus to disperse the clashes and used teargas in the process. State-owned Al-Ahram reported that this marks the first time that teargas has been fired inside a university campus.

Al-Ahram also reported that anti-coup students had barred ambulances from entry to campus after, contrary to Raga’i claims, many pro-army students were injured.

The intensity of the clashes prompted university security to retreat, leaving the campus’ gates closed but unguarded.

The Al-Azhar students’ protests began on Saturday to voice their rejection of the “military coup” which led to the unseating of former President Mohamed Morsi.

Forty students were referred to prosecution regarding Al-Azhar clashes.